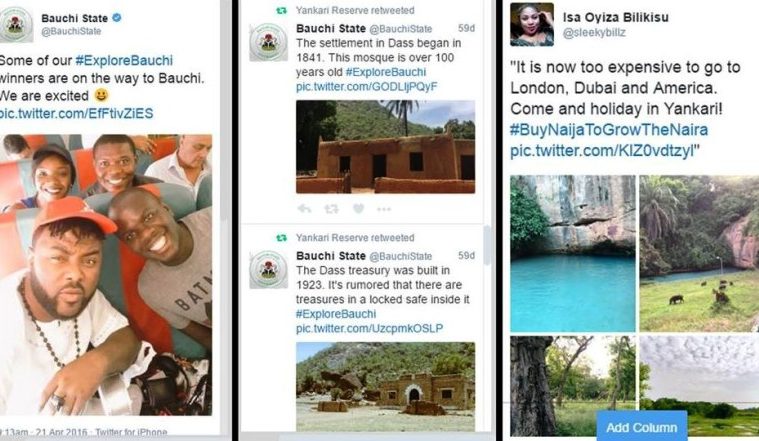 I have been looking at Bauchi State and I am amazed. I had really hoped that with the economy reducing foreign travel (it is EXPENSIVE), Cross River State would reap the money for holidays, honeymoons, conferences and other events that may have been done outside the country.

Other States are positioning for the market share while we wring our hands. When a door closes sometimes more open but one has to notice and plan to walk through.

The effects of the oil crash increased sales of palm oil, local rice and other local products and the prepared are reaping. Tourism is a product. Calabar had the upper hand with stand-out events. A reputation for peace and most of all cleanliness.

Steadily over the last year Nigeria has looked on in shock as week after week, the town makes headlines for an inability to clear garbage, maintain peace and get a handle on its out of hand street kid situation. I have seen no evidence of any coordinated destination promotion beyond the usual.

Even the Jazz festival introduced by Liyel Imoke is gone and the irony of Nigeria being spellbound by Donald Duke playing at the Lagos Jazz Festival is completely lost on us.

I am identified as a Cross River person and as such have been fielding questions about Calabar long before the all out media exposes on the collapse of our environment and other issues.

A couple that had planned their honeymoon in Cross River ages ago quietly cancelled and went elsewhere.

I know of conferences that had been considering Calabar shifting location. Who loses? The hotels. The caterers. The taxis. The emcees. The bands. The entertainers. The traditional groups. The souvenir makers. The salons. The shops. The barbers. The clubs. The joints. The tour guides. The Government tax coffers. The people.

People at home complain things are dry yet I am beginning to see certain states take interesting steps to get things moving while we lose the key advantage we earned.

Imagine all the money individuals invested in hotels and support services going into voicemail when this is the time to reap!

I would have never expected Bauchi to launch such an aggressive consistent tourism campaign DIRECTLY tapping into the made in Nigeria trend while Cross River of all the States in Nigeria has none!

Yankari Game Reserve is on twitter. Is Obudu Ranch active on twitter or facebook? Now there is a local explosion in demand for honey is the Obudu Ranch Honey brand increasing production for the local market and engaging people crying for jobs?

Bauchi State Governor is on twitter tweeting about tourism like a G. They have had hashtags, sharply jumped on already trending hashtags like ‪#‎buynaijatogrowthenaira and ‪#‎madeinnigeria

They have hosted free holidays, golf tournament, big events, they have improved their relationships with wildlife conservationists and facilities to catch the nature and safari crowd (while we with a National Park and 2 reserves) and they are using what they have to exploit a changing Nigeria. In this same situation we are all in.

Cross River State pioneered modern tourism campaigns and branding in Nigeria. We bring the world to Calabar once a year, splashed our ads all over the English premier league.

Now local spending on tourism is increasing, why are we not aggressively seizing the market outside of December?

Why am I not seeing exclusive or celebrity Obudu Ranch or Marina Resort Weddings and boat rides on Bella Naija? Why are we not reaping what we have sowed?

Under the leadership of Donald Duke we were one of the first States in Nigeria to plan for life after oil and he passed the baton to Liyel Imoke.

Governors may change but a masterplan should evolve, Governor Ayade is at the most unique point of opportunity with all the foundations already laid out. Life after oil. That time has come.

Yes, there are challenges but this is when we will understand what sink or swim or build flying boat means.

Back to the basics. The trash situation in Calabar is not merely an eyesore, a health hazard or an embarrassment. It is a threat to the economic well being of a State and its residents that have invested heavily in being a tourism and destination brand.

If we work very hard now we can turn this around and should actually be earning much more income from tourism than we ever did in the past instead of moaning and feeling helpless.

We should be way ahead of any Nigerian State in regards to reaping the benefits of local tourism ESPECIALLY NOW!

How can we be humbled and distracted by streets laden with garbage and armed teenage cults?

Being the cleanest city in Nigeria was one of our major attractions. Being peaceful and welcoming is a major draw. Can we get ourselves organized and bring back our glory and the much needed income to our State and its residents?

I will leave you photos of Bauchi’s recent aggressive tourism campaign (it has been on for quite a while now and I have been watching fascinated and also pained), so we get a glimpse of how an eye can be kept on the prize in the same country.

Cross River State Government and residents, WE CAN DO THIS.