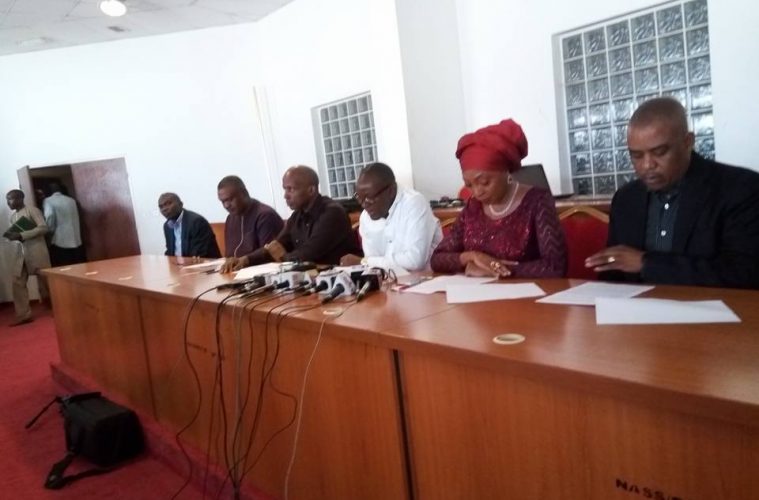 The Cross River caucus in the National Assembly has taken a stance on the impasse in the Nigerian judiciary. The legislators alleged that the confirmation of Justice Onnoghen as the Chief Justice of Nigeria (CJN) was being stalled by ethnic considerations. They also described the delay as a vendatta for his radical judicial pronouncements

The legislators made the allegation during a press conference held at the National Assembly on Tuesday, January 31.

The caucus said President Buhari’s inaction on the appointment provides fodder for those alluding to the vast conspiracy to deny Onnoghen the position.

Speaking on behalf of the caucus, its leader, Senator John Owan Enoh, called on the president to immediately transmit the name of Onnoghen to the Senate for confirmation.

His words: “There is a growing sentiment in certain quarters that Justice Onnoghen’s earned elevation to the rank of CJN is held in abeyance precisely because he is either not from a particular ethnic origin preferred by powerful forces of his profound and at times radical judicial pronouncements make him too principled to occupy this exalted office. “As political leaders, we should collectively resolve to build a just and fair society devoid of ethnic cleavages, a society where hard work and integrity are rewarded and not repudiated.

“As leaders, we should work towards the inauguration of a just order in which the East meets the North, South and West and together in confidence, united by a common and shared destiny and mutual respect, we confront the future together.”

Senator Enoh also pointed out that the National Judicial Council (NJC) in exercising its constitutional powers was transparent and followed laid down procedures and processes, to nominate the most senior officer in the judiciary.

“By appointing Onnoghen as acting CJN, the President has therefore foreclosed any insinuation as to incompetence or any disabling factor for him to be made substantive CJN.

“This will bring to an end the swirling speculations of vendetta against the revered justice and restore confidence in our judiciary. Any action contrary to this will convey and validate growing sentiments of vendetta,” the senator added.

Senator Enoh noted that Onnoghen still remains the most senior person in the judiciary as he is not due for retirement for the next five years.

He added that even though the Senate is on a working recess, they can still reconvene for the confirmation process, if the president forwards the name of Justice Onnoghen.

Onnoghen was ap­pointed as CJN in acting capaci­ty late last year following the retirement of Jus­tice Mahmud Mohammed upon clocking the mandatory retire­ment age of 70.