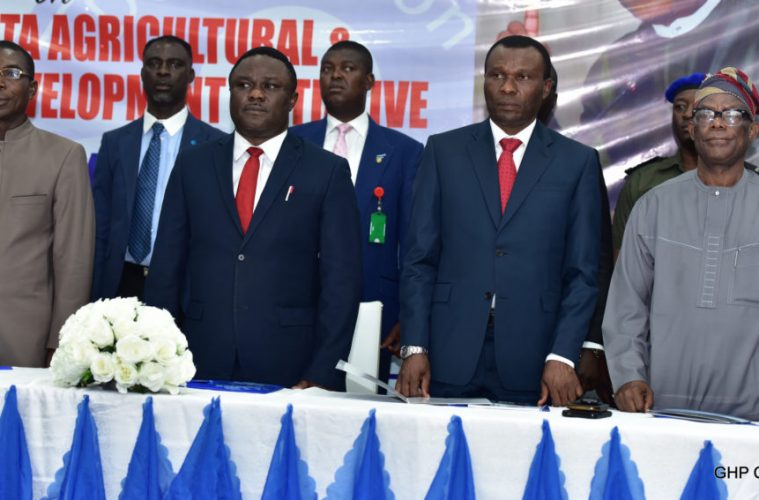 The Cross River State government has requested the federal government’s approval to take over the dualization of major entry points of federal roads into the state capital, stretching from Tinapa junction to Odukpani with an interchange.

Governor of Cross River state, Prof. Ben Ayade made this known when he declared open a one-day Investment Summit organized by the Ministry of Niger Delta Affairs, Pastor Usani Uguru Usani in Calabar, the state capital on Thursday.

“When we came into government, one of our critical concerns was the Calabar- Itu road, Calabar-Ikom-Ogoja Road and we wrote a strong memo to the Minister of Works, Power and Housing that the state has the capacity to take over the roads, dualize and run it as a major alternative to the superhighway in our first instance, that was in our first three months in office.”

According to Mr. Ayade: “the design for the new road and an aesthetically designed interchange was completed and already dispatched to Abuja. I trust the Minister of Niger Delta, our son will ensure that it gets the necessary attention over there for approval.

“I am happy to hear from the Minister that finally, our memo is receiving Presidential attention.”

Earlier, while receiving the Minister, Pastor Usani Usani in company of Minister of State, Prof. Claudius Daramola, during a courtesy visit to Government House, prior to his declaring open, the ministry’s one day investment summit in Calabar, Governor Ayade requested the federal government’s approval for licenses to explore and exploit petroleum resources in the state through the state owned petroleum corporation, PetroCross. According to Ayade, “As a responsible government, we had to decide, even before we were sworn-in to begin the search for hydrocarbon and we are happy to report to you today that we have a letter before the President backed by authentic report from a nuclear laboratory in Russia in partnership with the Ukrainian team that did the deep vision survey where those minerals are deposited requesting for discretional license from the Presidency for our oil company, PetroCross to start exploration and exploitation.

“We are not looking for money, just give us the license to find oil in our own Cross River Basin, partner with international corporations to exploit it. After all, hydro carbon is getting old fashioned and in eight years from now, no one will talk about it,” the governor appealed.

He stressed: “Please take the message to Mr. President. The greatest benefit any father can give to a child is to allow the child realize his or her full potentials. Cross River State is dying for freedom, opportunity to exploit these abundance natural resources.

“I want to also tell you with specific coordinates that Cross River has one of the largest deposits of onshore gas in Nigeria. We have one of the highest quality of crude deposits with very high level of petrol carbon.”

He argued that: “It is unnatural for you to have hydrocarbon deposits in the mountain basins of the Cameroon’s across to Akwa Ibom down to Delta, Bayelsa and Rivers and none in Cross River.”

Mr. Ayade highlighted other investment opportunities in the state and said setting up shop in the state takes less than a week.

“As you bring your core investors to join us to create a presidential diversification, I want to draw your attention to the fact that Cross River State already has an amalgam of industries and opportunities which profile we have already prepared and waiting for investors.”

He added that: “When we are talking about the largest industrial hub like the garment factory, or you are looking at the pharmaceutical factory, the tooth pick making factory, rice seedling plant, rice mill, cocoa processing plant, ceramic plant and oil mill processing plant, whatever factory you are seeking, you are going to have all those documentation in one week.”

On his part the Minister of Niger Delta, Pastor Usani Usani said the aim of the summit was to get all the stakeholders in the development circle on a single track to synergize and galvanize ideas that will foster rapid development of the zone.

He called on investors to take advantage of the business friendly climate in the state and identify possible areas of collaboration, assuring that the Federal Government was ready to support genuine investors who pitch their tents in the region, particularly those that will touch on the lives of ordinary citizens.

While calling on investors to quickly identify areas of partnership with the state as the Federal Government through its various financial institutions is ready to support them, Usani added: “Please be committed because Cross River is peaceful and stable for you to invest.”