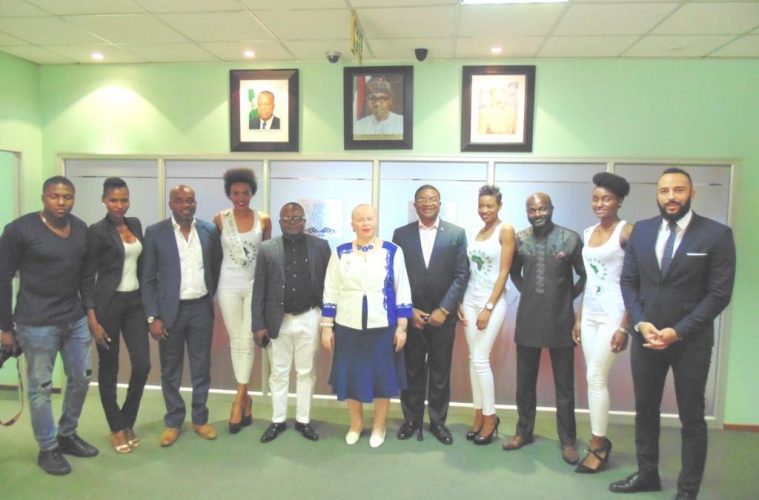 CROSS RIVER STATE ADDS ANOTHER FEATHER TO ITS CAP, LAUNCHES MISS AFRICA 2016 – THE SEARCH FOR THE TRUE AFRICAN QUEEN ON CLIMATE CHANGE

Climate change is reshaping human civilization as we know it. The response from global communities will determine the future of the human race. Our food system, our economies, our cities and communities are now adapting to climate change globally. The fate of our planet we call home is uncertain and it is in our best interest to come together and address the challenges we face.

Climate change affects everyone .Our actions and support can make a difference in how the world responds and adapts to its changing climate. It is with this resolve and conviction that gave birth to the Miss Africa 2016 pageant with the theme, “Green Economy, a tool for Sustainable Development”

The Miss Africa 2016 Calabar Nigeria beauty pageant is one of the many dynamic inclusion by His Excellency, Prof. Sen. Ben Ayade the Executive Governor of Cross River State to the Christmas festival and carnival calabar, (a 32 day festival that holds every year from 1st to 31st December with daily events that climax on the 28th of December with the Carnival Calabar) as he grows the brand which has held consistently for 14 years from strength to strength.

The Miss Africa 2016 maiden edition to be held in the beautiful City of Calabar, Cross River State, Nigeria’s No.1 tourist destination at the prestigious Calabar International Convention Center CICC on the 26th of November,2016. 30 ladies between the ages of 18-25 yrs. representing 40 African countries across 5 regions and after a successful casting that held across the various regions of the African continent the 30 finalists will combine brains and beauty for one to become the true African Queen on climate change who will promote green economy and initiatives as a veritable tool for sustainable development whilst merging beauty with nature and a tenacious cause centered around creating the much needed awareness on humans direct and indirect impact on here environment.

The Nigerian Ambassador to South Africa, H.E Mrs. Uche Ajulu Okeke who was clearly excited said there was no better time for the collaboration between both countries as it is very necessary for Africans to unite and promote their cultures. After receiving the Miss Africa 2016 team and some of the contestants in the Nigerian Embassy a day earlier, she has rallied her support by ensuring and declaring that any traveller from South Africa that wants to attend the Miss Africa 2016 and the Calabar festival and Carnival Calabar after applying will get their visas in 24 hrs. She is also attending the Calabar festival this year and has already booked her tickets and encouraged all South Africans to visit Cross River.

Also speaking on the activities and concept behind Miss Africa 2016 the Senior Special Assistant  Governor’s office on Events and Tourism, Mr. Thomas Ikpeme who also is the head of production Miss Africa said that the contestants and production crew working with CREC will be arriving Calabar Nigeria on the 16th of November and camp for 12 days of preparation before the main event on the 26th of November. The activities lined up will also see the entire crew experience some of the tourism sites in Cross River State.

As Miss Africa 2016 sets the stage for the Calabar Festival and Carnival Calabar, the Chairman of the Carnival Commission, Mr. Gabe Onah said that this year’s festival promises to be bigger, bolder and better with new events such as the food festival, the sports fiesta and the Nickelodeon kiddie’s fest for children.

As a show of goodwill, Mr Gabe Onah presented a plaque of honor to T-Bo Touch making him Ambassador to the carnival calabar which he received with so much pride and has promised to be in Calabar in December to report live for South Africa.

The head of the Nelson Mandela family, Ndaba Mandela said he was elated with the collaboration as Africa needs to share their stories and use them to inspire young people. He also added that young people have been given a voice through the internet and social media and that that power can be harnessed to create a positive impact in our society.

The Miss Africa 2016 event will be a night of glamour and style showcasing the true sense of African culture and heritage with the climate change theme in perspective. The event will be attended by top government functionaries, captains of industry, and celebrities across Africa.

From South Africa to Calabar to the world…You are welcome to Miss Africa.