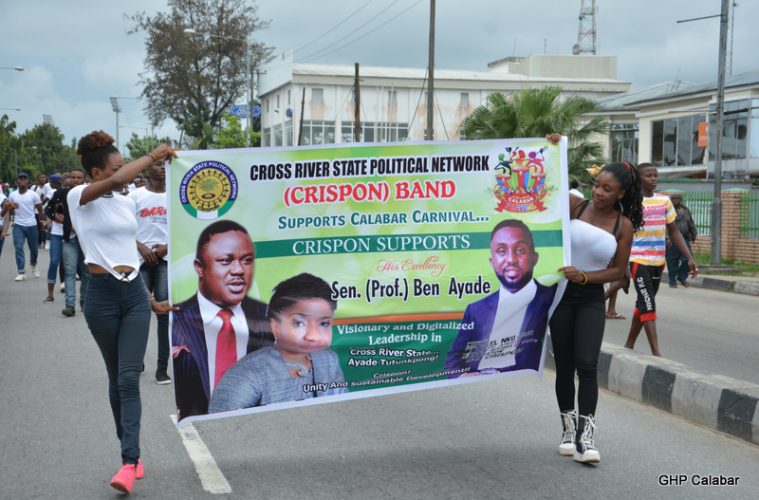 Cross River State Political Network, CRISPON, the largest online and offline socio-political organization in Cross River State will partake in the 2017 Calabar Carnival and is poised to register as a non competitive band.

On Sunday, at the first dry run for Carnival Calabar 2017, CRISPON made a colourful debut appearance with the participation of over 300 youths as the first non-competing band after the governor’s band.

According to the leader of the band, Prince Micheal Abou, Special Adviser, youth and student mobilization/Director General, CRISPON, he noted that “This effort of CRISPON is in solidarity with promoting this year’s theme which is “Migration” and seeks to ensure that young Africans are discouraged from illegal migration in search of greener pastures, we will be mobilizing over 5,000 youths for the CRISPON band this year.”

It will be recalled that, His Excellency, Sen. Ben Ayade said with the previous carnival theme which was Climate Change, properly communicated to the people as it concerns the impart and the need for global consciousness, the 2017 theme which is “Migration” is another salient phenomenon which needs to be addressed for young Africans, including Nigerians who need regain their self-confidence to harness the huge resources that God has endowed Africa with.

“Before now, Africans were being colonized but today they offer themselves to be colonized just because they want a quick success and chose migration. The migration story therefore is a narrative and an emotional story about a people who are so blessed yet poor.

The theme is up for the carnival bands to do give interpretation via the carnival. Story lines that will reverberates and cause young Africans to see need to believe in themselves,” Ayade said.

See pictures of CRISPON band at the dry run: