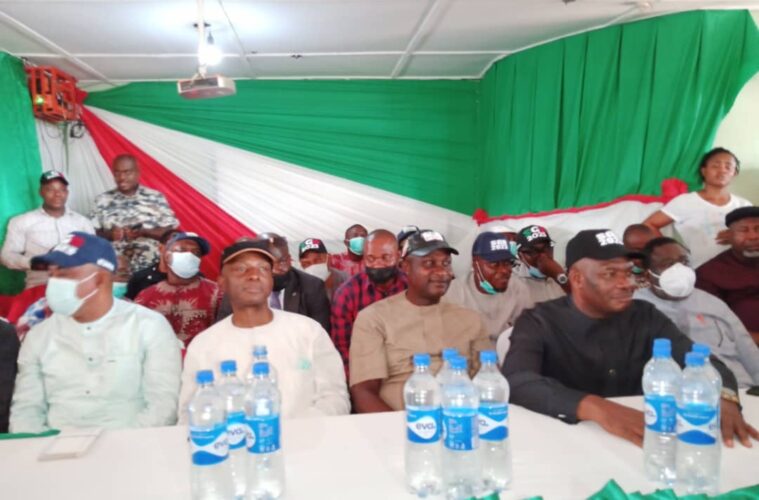 The governorship ambition of the leading candidate, Sen. Gershom Bassey got a major boost during a consultation with Abi Traditional leaders, as over 20 traditional rulers from Abi Local Government Area, endorsed his candidacy.

Bassey, who is the Senator representing Cross River South in the Red Chamber and the Chairman, Senate Committee on Federal Roads Maintenance Agency (FERMA) made this known during his visit to Abi Local Government Area of the state in the company of stakeholders of the PDP, supporters, amongst others.

The Senator stated that the reason for the visit is to ask the people of Cross River State what they think about the 2023 election.

” Am I resonating with those issues? The answer is yes. Those issues in 2023 would surround the economy of the state, security of the state, tourism, healthcare, and, education. These are the things that we believe are important as we move towards 2023″. Bassey said.

The Eagle, as fondly called by his supporters, stressed the need for all aspirants to have in-depth discussions with the electorate and to tell the general public what they have to offer.

He noted that one of the ways to know which of the candidates has the solution for the state by 2023 is for the party chairman to call for a debate.

“I have told the Party Chairman that we must debate. I have asked him to bring everybody interested in this election together. Let us sit and debate and Cross Riverians will choose who they want. Let us dissect all the issues and know who has the solution to the state.

“I, Senator Gershom Henry Bassey, have the solutions and I believe that because of the experience that I have, I am in a better position to take over the Pellegrino House by 2023”. He added.

Receiving the Senator and his entourage, the paramount ruler of Abi, His Royal Highness, Ovai Edward Osim thanked God for the life of the Senator, trusting God to be with him, guide and accompany him on this mission.

” Whatever will stand on his way to getting to the government house by 2023, Father clear such things away. We are appealing and praying that when he will remember that the traditional institution is a very sure foundation that one should trust and rely on”.

” We are in support of your Aspiration and Ambition. No man shall stop you. God will grant you success”. He prayed.

Also speaking during the visit, the Chapter Chairman, Hon. Victor Bassey extolled the performance of the Senator and said he is the best for the office, adding that, amongst all the aspirants that have visited the LGA, Bassey is mostly received and needed.

While commending the giant stride of the Senator, the Director-General, Sen. Gershom Bassey Campaign Organization in the central part of the state, Hon. Eko Ato pledges his complete support to the Senator, assuring him that Abi LGA will give him all the supports he needs.

“Abi Local Government Caucus will support Senator Gershom Bassey’s ambition with a heart of gratitude to win 2023 Governorship election in the state because he is our son”. He stated.

At the end of the visit, the friends of the Senator donated a campaign bus and he (Sen. Gershom Bassey) presented cheques of over N10,000,000 (Ten million Naira) and also promised to carry the Traditional Institutions along on issues of governance, while the traditional leaders, party leaders blessed and endorsed him as governor come 2023.