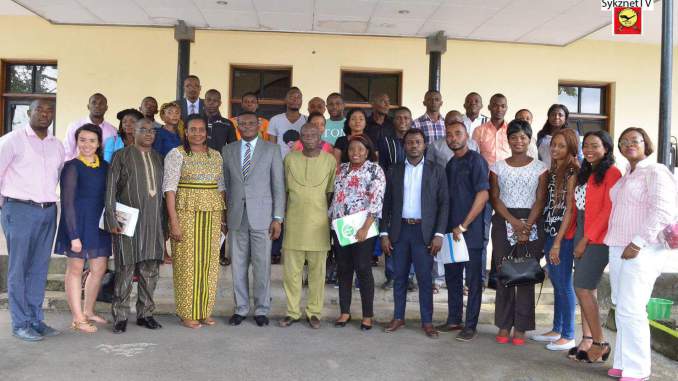 The World Population Day (WPD) according to the NPC is a global event commemorated on the 11th July every year since 1989 with the objective of creating awareness on current emerging population issues as they impact on the quality of the population. With this year’s theme circled around Family Planning, everyone is expected to play a vital role for the development of the nation.

Speaking at the event, the Cross River State Commissioner for Health, Dr. (Mrs.) Inyang Asibong said, the state Governor, Professor Ben Ayade has deem as imperative to participate in the celebration of the World Population Day. Adding that, she’s overwhelmed by the contribution of partners, such as, UNFPA, Pathfinder International, MDF and others who deals with the health of women.

Asibong clearly stated that, the CRSG has achieved an unprecedented change by investing in the family planning in the state. “However, we’re not alone in the fight, our system is not structured to completely receive this transformation, despite having a distribution network. The honour actually lies on the recipient to take full advantage of this supply.

Considering the use of contraceptives amongst married women, Asibong said, ages between 18-49 years has a prevalence of 15%. “There’s definitely a gap between available resources and deficiency of information. I am urging everyone, Civil society, NGOs, and all stakeholders to please raise awareness in your communities for the information to be disseminated and for beneficiaries to know that their means are available to them.”

The Health Boss said, the CRSG will continue working along partners to provide the necessary tools for the wealth being of all. “It is crucial now than ever to empower and invest in young generations. Demographic Dividend is truly a solution to this economic productivity and to further advance growth and development,” Dr. Asibong concluded.

Being the pivotal of the event, the State Director of NPC, Mr. Billy Eteng said Family Planning has been inculcated in this year’s theme because it is a life saving intervention which in turn prevents mothers and children.

Eteng also emphasised on religious injunctions, urging religious leaders, whether Christians or Muslims to use their office to preach the need for family planning to the people as he said sensitisation is the key. “It is my hope that the commemoration of the 2017 WPD will help sensitise the general public on the need to embrace family planning and child spacing and redirect the attention of stakeholders and policy makers to the need to mobilise resources in order to boost access to family planning information and services”.

Dr. Yakubu Aliyu, representing the Head of Office of the UNFPA in Cross River State, Dr. Kenneth Ehouzou said it is because of the day, UNFPA was created; so to fund and sustain the world.

In 2016, contraceptives provided by the UNFPA alone had the potential to prevent 11.7million unintended pregnancies, close to 3.7 million unsafe abortions and prevent an estimated 29,000 maternal deaths. About 40% of this intervention was during the Wise Up Campaign in Cross River State.

Dr. Yakubu said it is the duty of the UNFPA to continue to work towards achieving the 2030 Sustainable Development Goals (SDGs) by providing Universal access to sexual and reproductive Health services plus family planning.

He further thanked the CRSG for providing an enabling environment for the organisation and pledged that the organisation will continue to work at it best to ensure the SDGs are met in the state.

Speaking also was the Director General of the Cross River State Primary Health Care Development Agency, Dr. (Mrs.) Betta Edu, represented by Dr. Onebiene O. Ana who said the Agency recognises family planning as a key role in regards with the maternal mortality and morbidity which Nigeria and the state is far behind.

Dr. Ana said the Agency is working in collaboration with partners to expand access to family planning and the ways to key into National policy and remove the restrictions that has affected the provision of family planning services. “Therefore, we are adopting the task shifting policy of the nation that says that, ‘Some task that are hitherto were only allowed to be performed by only nurses, Midwives and doctors’ can be task-shifted to community health extension workers, so that we can have more people having access to family planning services.”

Ana subsequently reiterated that, the Agency is working with the Traditional Birth Attendants (TBAs) on educating them on referrals to the available facilities and more to ensure that all communities can have effective birth spacing, successful family planning which in turn will contribute to the development of the state and the nation.

In a goodwill message was the Executive Director of MDF, Mr. Jeffrey Adamade who said the initiative of the wife of the Governor, Dr. (Mrs.) Linda Ayade, advocates family planning practises such as birth control, abstinence and fertility awareness.

Adamade said, being the leading indigenous NGO, MDF priority is to empower and safeguard the well-being of women, adolescent girls, and young people and address the specific needs and concerns through an advocacy tool, behavioural change, health talks, training in SMEs, etc, thereby making the people self-reliant and economically stable.

He concluded by calling on international communities, partners and stakeholders to redouble the efforts of MDF in driving advocacy process as it concerns the issues raised on the WPD 2017.