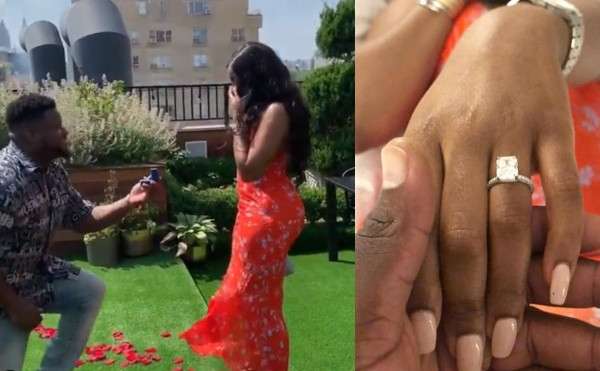 The singer’s brother had taken his longtime girlfriend to a new spot in New York City where he got on one knee to propose to her. In the video, the romantic man had decorated the spot with ‘Marry Me’ sign and he proposed to her while music played on.

Kani who’s real name is Ekanem is a Calabar chic born and raised in the US. She recently bagged a M.S degree in Physiology and Biophysics from Georgetown University .

Adewale Adeleke professionally known as Chairmahkn, is a song-writer and businessman. Born in Atlanta, Georgia, Adewale relocated to Lagos, Nigeria, in 2010.

In 2012 he produced the album ‘Omo Baba Olowo’ on his record label HKN Music. In 2015 Adewale was appointed Executive Director in his father’s Energy Company Pacific Energy. In 2014 HKN Music was nominated for City People Entertainment Awards’s Record Label of the Year. Adewale was born in 1988 to Chief Deji and Grace Ajunwa in Atlanta. His father is a Nigerian businessman who owns Pacific Energy.

He took to his Instagram with the caption below:

Yesterday was the best day of my life! She said yes💍👰🏽🤵🏾”

Kani also shared the video and photo of the ring on Instagram, writing “I love you and that’s the beginning and end of everything #isaidyes💍”