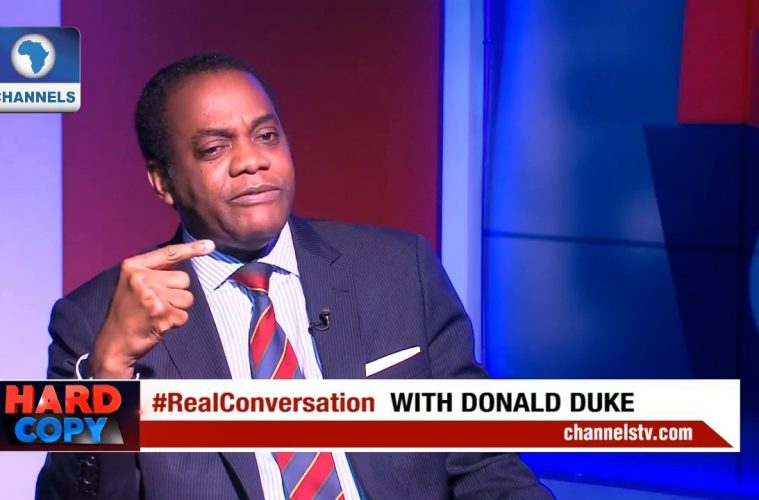 Former Cross River State Governor, Mr. Donald Duke, has sounded a bleak warning that all is not well in Nigeria, despite the September news that the country was out of recession.

“We are living in a fool’s paradise,”Duke said at the official launch of the National Competitiveness Report and Sub National Index held in Lagos, yesterday. “We here in Lagos are cocooned from the realities of Nigeria. Take a trip to Borno State, go to parts of the north and the Niger-Delta.”

Two weeks ago, Duke said he was talking to Aigboje Aig-Imoukhuede and Aliko Dangote, when the latter told the story of a boy, about five or six years old, whom he found at an Internally Displaced Persons (IDP) Camp and asked for his father.

“The chap looked at him (Dangote) but did not understand the concept of fatherhood,” Duke said. “He is in the IDP Camp. There are thousands of them in those camps; there is no hope for them; all they do there is just breathing.”
The reality, Duke noted, was that the government of the day was more interested in politics than economics. “And if you don’t get the economics right, then governance cannot work,” he said. “You cannot be competitive when you are not productive. The first thing is how do we get productive?”

Duke also criticised the way states in Nigerian have been set up, explaining that the units see themselves as political entities, but not as economic entities.

“And there is no master-plan to make each one of them an economic entity,” Duke said. “So, we have a country, where a blessing (exponential population growth) is turning into a curse, because in the next three years, our population will be 200 million, yet all the productive indices are going down. Lagos may be crowded out; every year, 750,000 new people come to Lagos to reside; the economy cannot support that. So if you don’t get the rest of the country working, Lagos itself will collapse.

“I had a meeting once with U.S. State Department, and they said to me, we have no conversion interest in Nigeria any longer; yes we have a few companies – ExxonMobil, Chevron – working here, but we don’t buy oil from Nigeria, and the export-import bill is not significant. But we have a lot of interest in Nigeria, and that is security. Nigeria, to them, is like a dam, and if it should burst, it would flood all of West and Central Africa. So their only interest in Nigeria is insecurity because the country can also be a base for terrorism – terrorists thrive in poor environments. They are not dealing with us on the basis of commerce, they are dealing with us on the threat that we pose to them.”

Duke also believes the Buhari government has no business patting itself on the back on the basis of improving the economy.

“Just because it is easier for goods to pass through the port – that’s no big deal,” he said. “The point is what does each one of us add to the general well- being of the country. Most folks in Nigeria are parasitic. You walk on the streets and people in the prime of their lives are hawking plantain chips if they are lucky to find something to hawk. We, the few privileged, sit in our cars, our windows wound up, and pretend to look at our phones because we don’t want to see the reality out there.

“This country, for instance, has to grow at about 15 per cent annually, not in Lagos, but nationally, for the next ten years, to absorb the numbers that are out of the economy. We are self-deceptive. We say that unemployment is 15 per cent.

“Then we sit down and say that inflation is 16 per cent. How do you arrive at that? I know I’m broke. So if inflation is too much money in circulation, where is this money? The truth is too few people have too much money. If you re-circulate resources properly, and I am not being socialist here (all you need to do is to create jobs for people), then you’ll find that it will reflect on the economy.

“So what we are doing is to run a goodwill economy; 85 percent of the economy is depending on the goodwill of the 15 percent.”

To move the country forward, Mr. Duke advocated for a policy he described as SHIT (Skills, Health, Infrastructure and Technology).

“I don’t use education any longer because education is beyond reading and writing. Education without the set skills that make you productive is hollow,” he said. “We are ridiculously spiritual because we live purely by the grace of God. Yes, we all do, but heaven helps those who help themselves. If you are afflicted here by a disease today, your chances of survival are 50:50. The drugs for common diseases are not even manufactured here. So we have a loss of productivity that we have not addressed at all.”