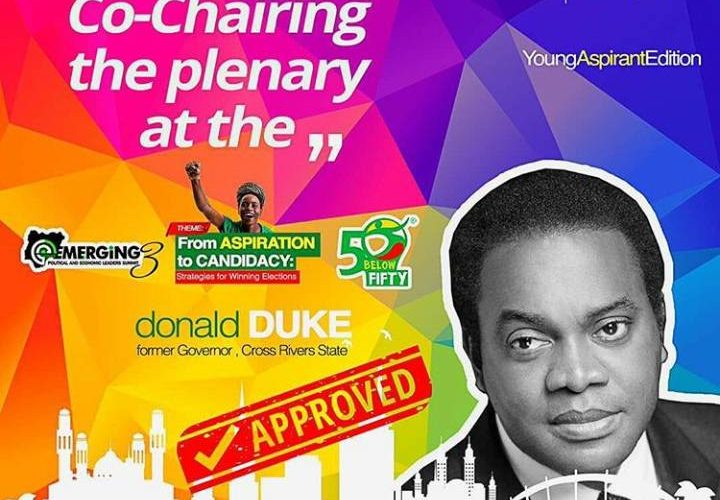 Former Cross River State Governor, Mr. Donald Duke will Chair the plenary for the 2018 edition of The Emerging Political & Economic Leaders Summit scheduled to hold on the 18th of July at the Shehu Musa Yar’adu Centre, Abuja at 9:00 AM.

Duke who recently declared his intention to run for Nigeria’s presidency in 2019 is set to put the country on the right stage when he speaks at the 3rd Emerging Political & Economic Leaders Summit (EPELS). He will be joined by other prominent national and international thought leaders within the public and private sectors, civil society organisations, political parties, as well as stakeholders to address issues bothering on the nation’s leadership.

This year’s event christened “Young Aspirant Edition” is Themed: “From ASPIRATION To CANDIDACY: Strategies For Winning Elections,” and will bring together Young aspirants below 50 from all political parties to a platform for effective networking and engagement with political party leaders.

At the summit, manifestos and programs will be scrutinised with a view to ensure that young aspirants with the most feasible programs enters the ring for elections, while no one is excluded due to lack of resources or political platform. EPELS 2018 will also give the citizenry first hand information on each aspirant, so that the people get the very best on the ballot to choose from and to determine whether they know the responsibilities of the office they are vying for.

The event is expected to witness the gathering of top government functionaries, Technocrats, high profile Nigerian and international leaders, civil society organisations, and stakeholders in the 36 states of the federation and the FCT to chant a new course for the nation.

EPELS is an annual conference aimed at bridging the gap between existing and  emerging leaders. It is also geared towards promoting and facilitating political inclusion and to provide a platform for effective networking and engagement with political party leaders.

Registration for the event is free. Interested persons can register via www.eplsummit.ng, OR call 08032266543 for partnership.