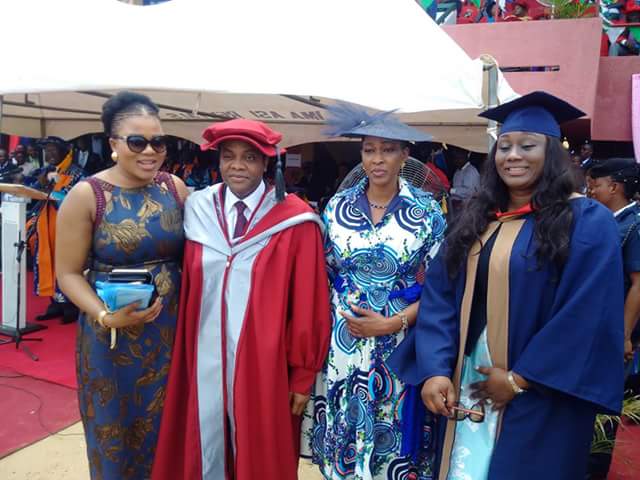 Recipient of an honorary Doctorate from the University of Calabar - H.E Dr Donald Duke & his dear wife H.E Onari Duke

Moses Abang, the Registrar of the University, said in a statement on Monday in Calabar that the lecture slated for Friday, May 11, has the theme “Tourism in National Development”.

The lecture is part of the programmes lined up for the convocation ceremony proper.

According to the statement, a pre-convocation lecture press briefing to kick start the ceremony has been slated for May 9.

He said that commissioning of projects executed by the Prof. Zana Akpagu’s administration will precede the lecture.

Vice chancellor of the University, Prof. Zana Akpagu disclosed this while speaking at the pre-convocation press briefing which held at the University’s Senate chambers yesterday in Calabar.

Akpagu while reeling out the activities lined up for the ceremony which is slated for Saturday, May12, stated that recipients of the honorary causa degrees were not just ordinary people in the street, but men of proven integrity who have immensely contributed to the socio-political and economic development of the institution.

He said, as a senate leader, Ndoma-Egba, facilitated and erected  a twin building for the institution’s faculty of law which he believes is going to solve the accommodation problems usually faced by students of the faculty.

According to the Vice Chancellor, apart from Ndoma-Egba aiding the school to own a twin structure for the law faculty, the former senate leader was also very flawless in the discharge of his duty at the senate.

Akpagu added that late Dr. Michael Archibong will be also be awarded posthumous degree for his contribution to the growth of the university.

“He did that because the medical council of Nigeria demanded that the medical students especially the final year student must stay close to the University of Calabar Teaching Hospital UCTH and he erected the structure and gave to the institution”.

Speaking about the inclusion of the Emir of Borgu among the awardees, Akpagu explained that it was an avenue to build a bridge between the south and people of north central adding that there was nothing to bestore an award  on any Nigerian who has contributed tremendously to the socio-political and economic development of the nation.

Other items on the activities lined up for the event was the award of PHDs, first degrees and diplomas to graduands from the institution.

The university shall convoke about eleven thousand eight hundred and seven graduands (11,807), with 42 getting first class honour.