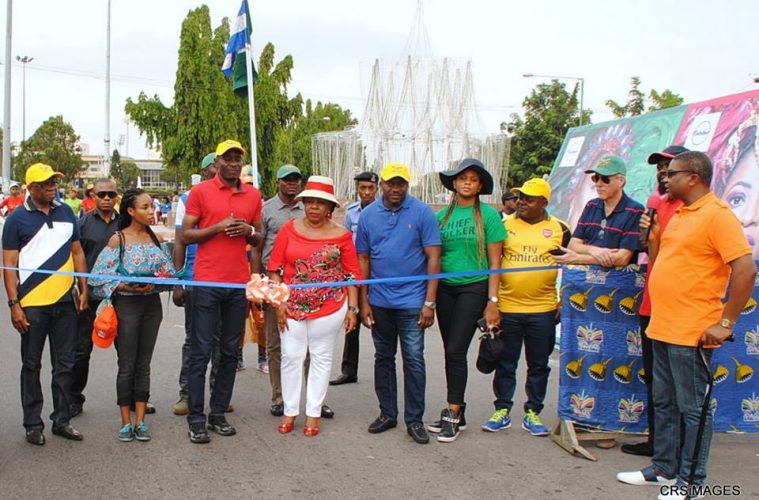 Cross River State governor, Prof. Ben Ayade has called on the people of the state to open their hearts and doors to receive tourists who will be trooping into the state for this year’s Carnival Calabar.  Ayade made the call at the Millennium Park in Calabar while flagging off the last carnival dry run to herald the main carnival which is slated for December 28.

Represented by the Speaker, Cross River State House of Assembly, Rt. Hon John Gaul Lebo, the governor said: “The event which has become part and parcel of our state will be bigger and richer in content this year. So we must continue to exhibit the hospitality nature we are known for in receiving visitors.” He was optimistic that the current economic recession in the country will have a positive effect on this year’s Carnival.

“Cross River State will experience massive turnout of visitors to watch and participate in the biggest street party in Africa as it will be free, interesting, bigger and bolder,” he added.
Ayade lauded the various carnival bands for their active and brilliant participation in the dry run and urged them to maintain the tempo.

Earlier, Chairman Cross River State Carnival Commission, Mr. Gabe Onah, disclosed that the event was tagged “dry run of celebrities” as some members of the Nollywood family were in the state to participate in the event prior to the 4th edition of the Cross River movie awards.”
Onah also said that,” this is the last dry run after two successful hosts; hence we expect a great show on December 28.”

The event saw revellers dancing in their beautiful costumes along the 12km carnival route.