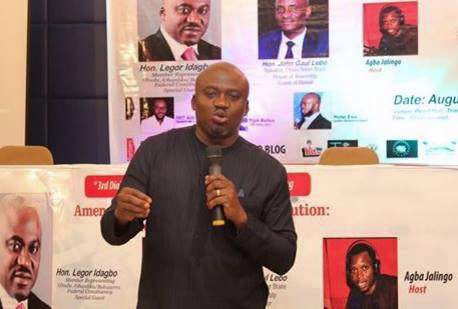 Federal lawmaker, Legor Idagbo has admonished constituents who call him pleading for financial assistance to realize that his role as a legislator is to make laws not dole out cash gifts.

Mr. Idagbo who represents Obudu/Obanliku/Bekwarra constituency in the House of Representatives, stated this while speaking at the 3rd quarterly Dialogue With Agba Jalingo Town Hall Meeting held Monday in Calabar, the Cross River State capital where he was special guest to discuss the theme; “The Amendment of the Nigerian Constitution:The Roles of Youths and Benefits.”

He bemoaned the fact that the youths rather ask their leaders for money instead of asking them for a future and better representation, a situation which he said has nailed and kept them where they are.

He argued that value systems in Nigeria have a faulty foundation, which is why the youths of today seek immediate gratification over future gains. “My job as a legislator is to make laws that will transform the lives of my people, that is my major responsibility, that is why I was voted as a lawmaker; and not to dash out money.

“Youths must change their perceptions on governance, know what they truly want and ask the right questions and right favour, rather than resort to begging leaders for money that will not transform their lives. You cannot live the rest of your life begging money”, he said.

However, Mr. Idagbo went on to clear the air and intimate the youths on the ongoing constitutional amendment and what it envisaged for the youths; including how the youths can take hold of the various opportunities provided for as it concerns them.

He highlighted some of the amendments ongoing at the National Assembly as; Not Too Young To Run Bill, Local Government and House of Assembly autonomy, Revenue Mobilization Bill, among others.

Mr. Idagbo said that the town hall meeting is coming at a very auspicious time when the National Assembly undertaking a constitutional amendment.

He also said that the topic of the town hall was well thought out because it centers on the constitutional amendment and it provisions for youths of the nation. Continuing, the lawmaker thanked the organizing team and commended Agba Jalingo in particular for putting up such a platform for the youths to converge and dialogue on policies of government as it affects them.

His words, “It is not easy for a single individual who is not in government to have such an idea transformed into reality to gather youths from all walks of life for mentorship and providing orientation for them as well. I must commend and thank you for all these efforts, history will never forget you for having such a large heart to do the great work you are doing”. The Dialogue with Agba Jalingo Town Hall Meeting is a quarterly event aimed at bringing people together to dialogue, brainstorm, and to interact on issues and policies of government, keeping them abreast of happenings in the state and nation at large.

The event attracted people from all walks of life, youths, civil society groups, and the media.