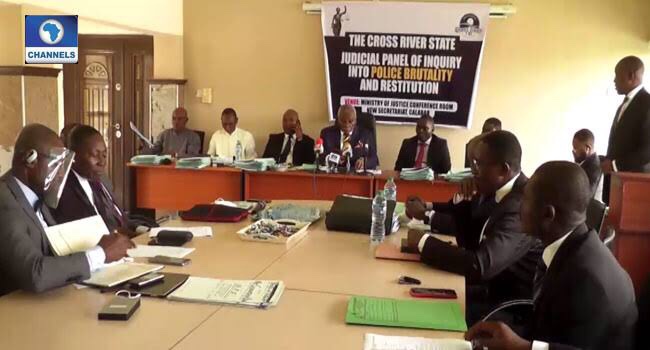 EndSars Protest: One Year After, Cross River Panel Yet To Submit Report

It is exactly a year after the #EndSars protest against Police brutality that rocked many cities across the nation including Cross River State. Calabar. The state capital and other urban towns within the state were badly hit by hoodlums who hijacked the protest and went about destroying both government and private properties.

The action forced many state governments across the country to set up panels of enquiry to investigate the issues raised by the protesters which included disbandment of the notorious police unit, Special Anti-robbery Squad, pay compensations to victims of police brutality as well as bring culprits to book.

In October 2020, Cross River State governor, Ben Ayade inaugurated an 11 man panel in Calabar, headed by retired Chief Judge of the state, with a charge to ensure justice is served. According to reports, a total of 39 petitions were received by the Panel in Cross River State.

While Lagos, Anambra, Rivers and many other states have continued to address the issues as well as pay compensations, the panel in Cross River State has since remained elusive without any payment of compensation not culprits brought to book.

For example, at it’s sitting in Lagos Chairman of the Panel, Doris Okuwobi said the Panel heard 186 petitions from 262 petitioners where 70 of them were looked into, while N410.2million was paid to victims as compensation.

In February 2021, the Rivers State governor Nyesom Wike while receiving report of the #EndSars Panel asked the Inspector General of police to look into the issues raised in the report.

So far about 28 states have submitted reports of the #Endsars against Police brutality, according to reports from the office of the Vice President, Prof. Yemi Osinbajo.

However, report of the panel set up by the Cross River State government is yet to be made public, one year after.

Several attempts made by this newspaper to reach Chairman of the Panel, Justice Michael Edem to give reasons of the delay in submitting it’s report was unsuccessful as he simply told our reporter “ be patient, you will hear from us soon”

If the Panel fails to submit it’s report. It will mean that the hope of victims of police brutality to get justice would have been dashed.