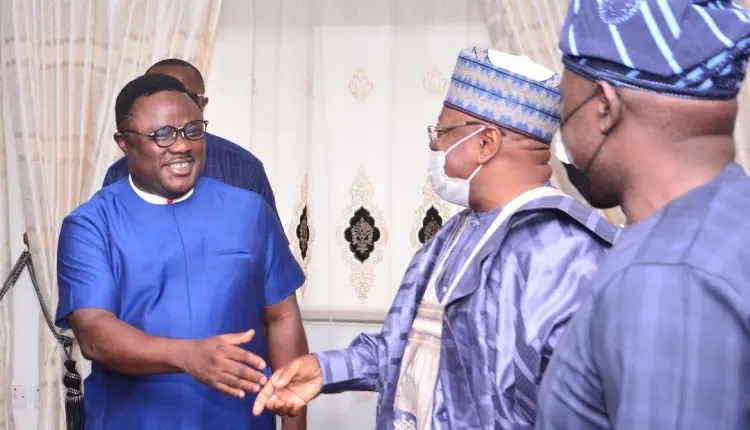 The visit of the committee, which is coming one year after hoodlums took advantage of the ENDSARS nationwide protest to unleash mayhem on government and private property worth billions of naira in Calabar.

During a courtesy visit on Governor Ben Ayade, the Chairman of the committee, Senator Ibrahim Gobir expressed shock and sadness at the level of destruction of the properties in the state.

“we are saddened by the event and especially the mindless level of destruction visited on all the properties we saw. We needed to be in Calabar to see things for ourselves before concluding our report.”

“Immediately we landed, our first port of call was Tinapa Business and Leisure Resort and what we saw was unbelievable because we never expected that kind of destruction we saw in that place.

“I was at Tinapa some years back and I know the kind of things you could find in there because what was there was second to none in this country. Unfortunately, when we went there the situation was so bad and the destruction was so much,”

However, the committee commended the governor for investing in developing industries especially at the Ayade Industrial Park.

“Despite all these, we have seen the kind of development through industrialization under your watch and of course, we are not surprised because you are a man of intellectual capacity,” he stated.

Governor Ayade expressed gratitude to the committee for its tour of the damaged infrastructure describing the attacks as willful, vicious and mindless.

Governor Ayade stated, “We have people on video while destroying our properties saying: Let us see how Cross River will be boasting about their Tinapa, let us see how they will be talking of this industrial park.

“Truly, the highest destruction in the whole country was in Cross River, as most of our assets including our piles and pylon factory, which you could not go because it is in faraway Akamkpa were destroyed.

“So there was somebody behind the strategic attack because even the looting they did was just too much. All the persons arrested in connection with the violence happen to be non-indigenes.”

He said, “when we did door to door search, the people in whom we found some of our looted assets were linked to a certain ethnic nationality. So, for us as a state, it is like we lost a whole generation.”

Governor Ayade informed the committee of several incentives given to young Cross River people prior to the wave of destruction, disclosing, “we learnt that there was a team of people, who were going to come through the waters to come and attack us because they think it was an embarrassment that everywhere else was burning except Calabar.”

He expressed the hope that the Nigerian Government after considering the report of the committee would intervene by enabling the state and private individuals affected rebuild.