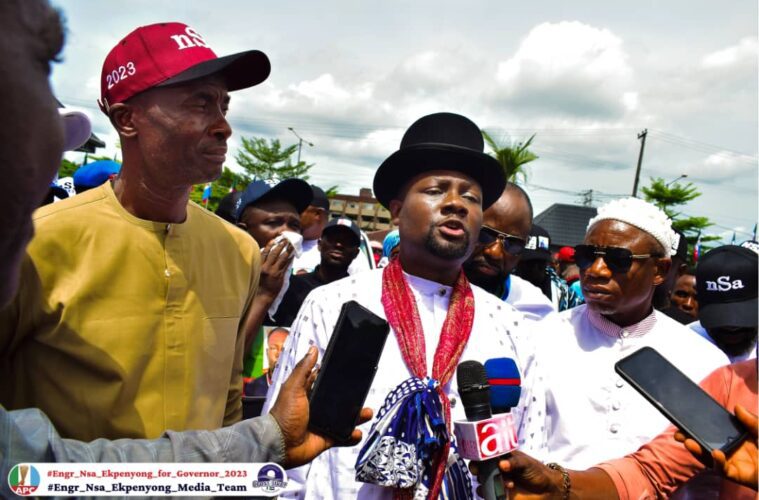 156 views
News0 Comments156 views 14 min read
Cross River’s rave of the moment and maritime giant, Engr. Nsa Ekpenyong Asuquo has entered the fray for the governorship seat of Cross River State in 2023 under the aegis of the All Progressives Congress (APC).
Speaking at his official declaration amidst party executives, supporters and APC faithfuls, Engr Nsa Ekpenyong reiterated his determination to deepen collaborations with the present administration, especially in the industrialization, in order to build the Cross River State of everyone’s dream, if given the opportunity to become governor.
“I understand the challenges of the youths, I have interfaced with them; and if I prevail in my bid to be Governor, I will ensure that there is no industry set up by the Governor Ben Ayade-led that will be left moribund. I will make them work hundred percent,” the governorship hopeful assured.
Speaking on the industrialization vision and strides of governor Ayade, the towering political figure enthused: “Most of the industries the incumbent governor has built now, I can tell you for free that they have the long term propensity of firing Cross River into economic prosperity. And transition should be given to someone who understands how to pilot the frameworks that are already on ground, especially the
Bakassi Deep Seaport project.”

On the economic significance of the Deep Seaport, Engr. Asuquo averred: “I tell you, if you take off the shores of Lagos seaport, I give you two months, Lagos will be bereft of its economic boom. And someone has conceived the idea to build a deep Seaport in Cross River State. In a couple of years to come, if the Seaport is put to good use, it will galvanize the viability of the entire economy of the State.” 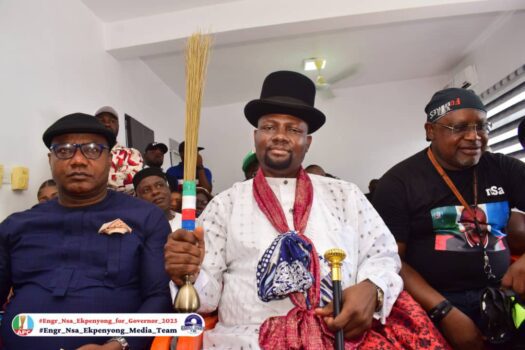 Speaking from an order that seems to be evolving from ideology as the principal dynamic, the oil and gas magnate alluded: “Before I commence a new project, I will ensure all the ones on ground work effectively, most especially the Bakassi deep Seaport because this is my area of Specialty.”
“If we want to win this election, give me ticket. Let me win the election for our party, the APC, because we have everything it takes to win this election. We have so much capacity, we have the charisma, we have the money,” the frontline aspirant asserted.
Articulating his views, the chairman of Engr Nsa Ekpenyong Campaign Council, Rt. Hon. Agbiji Mbeh Agbiji said; “there is a difference between taking over from the incumbent Governor and succeeding the incumbent Governor. Succeeding the Governor has do with someone who has a clear vision of the present administration; someone who will partner with Gov. Ayade to sustain the industrialization drive currently going on in Cross River State.” 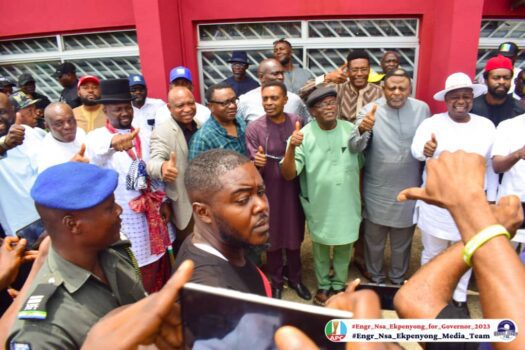 Rt. Hon. Agbiji added that “the only person who can do that effectively is Engr Nsa Ekpenyong. Nsa Ekpenyong Asuquo as a successful business man, who started with nothing, but today by the Grace of God has everything to think of and more.”
Chiding the ‘Godfather phenomenon’ bedeviling Nigerian politics, the former lawmaker said Engr. Asuquo is “a man with excess capacity,” with God and the will of the people, his only political beacons. He added that in Engr. Asuquo marks the end of the search for a successor of Gov. Ben Ayade in 2023.
In his remarks, the State Party Chairman, Barr Alphonsus Ogar Eba said “before the world today is a young man Engr Nsa who came and washed some dirt off us. When we where tasty he gave us water to drink, not too long he gave us a bus, today we have the latest Toyota Hiace Bus that can not be found anywhere in Cross River State, except in APC state Secretariat Calabar, which has become the one and only vehicle of this party, given to us by this man called Engr Nsa.”
“My friend and brother we will never stop thanking you, you will never know what you have done for this party. I thank the Governor of Cross River State whose magical works attracted Engr. Asuquo to the state for consultation. Nsa gave us so much money, he gave us a vehicle, and so many other things,” the APC chief added.
Speaking further, Barr. Eba said: “may God forbid the day, I have nothing to say about you because you are a good man. You have a clear understanding of what you want; and you have given a clear roadmap of what continuity means.
“The signature projects of our dear Governor, which today are being constructed, you said it will be your starting point. My brother, Engr Nsa, you are taking off well and you are not pretending about it because it is your field. I give you my blessings of the day. You came and blessed us, I blessed you in returned. Today I give you the key to Governorship ticket, take it,” the APC chieftain concluded.
Join the Conversation!