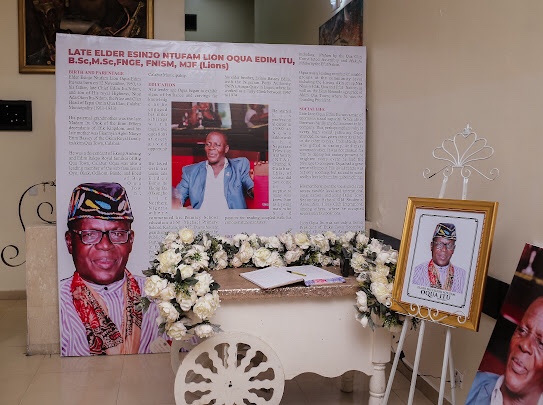 Nobody likes funerals. All those flowers decorating a tombstone and eulogies draped across the coffin, like a farewell jewel; amid the hubbub, a full life careens to a close. It is understandable, therefore, that many would gladly shirk appearances at the entombment of a friend or even a close relative.

In light of this, it was humbling to behold the creme de la creme of Cross River State high society as they thronged the funeral of Late Elder Oqua Itu.

Late Elder Oqua Itu could not have wished for a more perfect farewell. The sky over his native Big Qua Town was a picturesque blue and the ambiance of the town morphed into subtle gloom as if in mourning with the bereaved.

Late Elder Oqua Itu’s final departure from mortal life was no doubt a spectacular affair. For a man who lived an impactful life, it was only fitting that he enjoyed the rare privilege of such a grand funeral.

The funeral activities which kicked off with a Night of Tribute on Thursday 18th November, 2021 at Transcorp Hotel Calabar was followed by a Novelty Memorial Match in his honour and Sing Song Service at Usang Iso Memorial Presbyterian Church on Friday 19th November, 2021.

Traditionally, there was a Royal Fraternity procession (Ottoe) along the streets of Big Qua Town Calabar.

Lying-in-State was at Lions Park Calabar with Lion Lynda Odu – Okpeseyi (District Governor, District 404A2), Lion Omolola Anobili (Multiple Council Chairperson) and a host of members of the MD Council.

At the funeral service last Saturday, politicians including former Governor Donald Duke, industry titans, first class monarchs and academic giants, friends, family, among others, were in attendance to say goodbye.

The overwhelming tone in all the tributes was genuine affection and respect, sentiments that Late Elder Oqua Itu had invariably evoked during his lifetime.

Indeed, at the funeral reception, the goodwill enjoyed by Late Elder Oqua Itu and his beloved son, Charles Itu was brought to full display as thousands of his friends, family, political and business associates trooped out to participate in the celebration of life.