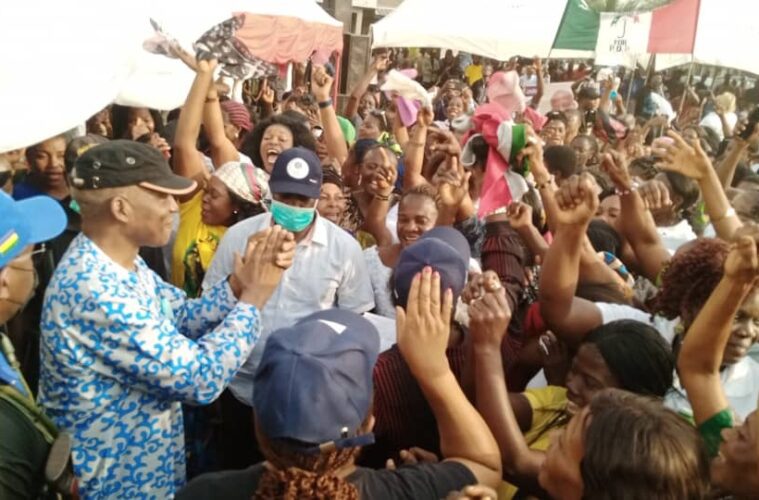 FANFARE AND CARNIVAL GALORE AS THE EAGLE LANDS IN IKOM

Distinguished Senator Gershom H. Bassey, a Governor hopeful under the People’s Democratic Party in Cross River State is currently engaging the 18 Local Governments of the State in consultation of his desire to declare his intention to run in the forthcoming Guber election in 2023.

The consultation rally in Ikom Local Government at Two-Ends Field in Tuesday,11th January 2022 was simply electrifying with a sea of heads turned out to welcome the People’s next Governor.

The Distinguished Senator was treated to a grand fanfare, carnival like reception by a crowd of support groups, dance displays by different socio-cultural groups and loud endorsement remarks by key party stalwarts who threw their weight behind the Eagle.

The Paramount rulers of Ikom local Government area, Ntol Peter Njul Eku while receiving Sen. Gershom Bassey asserted that they have taken a position to support the zoning of Governorship to the southern senatorial district as they had previously unanimously met with the leaders of the central and Governor Ben Ayade when he was still in PDP to decide the existing zoning of Governorship to be returned to the south, iterating that, at this point no individual within or outside community can change the sacrosanct resolution of the traditional custodians which is in tangent with the government, party elites and the entire state as Senator Gershom Bassey would be supported and voted in as Governor of Cross River State come 2023.

In the speech, Rt. Hon Bassey E. Ewa lauded the Ikom PDP family for the warm reception given to Distinguished Senator Gershom Bassey and his team noting that, Sen. Gershom has been part of the past two administrations of the State which did remarkably well with giant strides.

He admonished the people to support the Back-to-South agenda and Senator Gershom Bassey for Governor.

Barr Attah Ochinke in his his gentle and famous speech to introduce the man of the moment, Distinguished Sen, Gershom Bassey acknowledged that Ikom people stood by the past two administrations which Sen. Gershom was part of the planning and delivery of governance of those administrations and as well encouraged the BacktoSouth Agenda..

From the women, the Ikom Women Leader, Mrs Justina Enya Ndoma declared that Ikom is totally sold to the South Agenda.

In a his statement, while receiving Senator Bassey, the managing Director of the Bakor medical center, Dr. S. E. N Ebaye said he, his family and his immediate constituents are for Senator Geshon Bassey and he’s totally in support of zoning.

In his profound speech, the Member Representing Ikom/Boki Fed Constituency, Rt. Hon. Ntol, Chris Agibe said PDP laid a successful democratic administration for Cross River State since 1999 to 2015 when a mistake of the present administration was made

He averred that once the PDP comes back on board come 2023, all the mistakes will be corrected.

He prayed for Senator Gershom Bassey and wished him an answer to all his prayers as angels would be raised to solicit for his victory and all the local Government areas of Cross River State would endorse and vote him as the Executive Governor of Cross River State, come 2023.