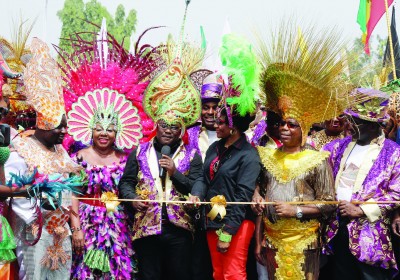 As the government seeks additional income from the non-oil sector, ANNA OKON takes a look at the nation’s festivals, heritage sites as veritable sources of revenue.

Nigeria is a culturally rich nation. The country’s festivals and heritage sites are well documented tourist attraction to people all over the world.

A visitor to Cross River State in December during the 2015 Calabar Carnival, Moya Agwatu describes her amazement at the spectacle she witnessed. “I was awestruck,” she recounts. “I have watched the Brazilian Samba dancers on television but the sight that greeted me in Calabar was even more exquisite and more beautiful than any Brazillian Samba dance I have ever watched.”

Calabar Carnival is one of the numerous attractions that brings tourists to Nigeria every year from different parts of the globe.

In its 11th year, the festival, described by the Cross River State Governor, Ben Ayade, as the largest street party in Africa is renowned for its beauty and sheer cultural extravagance. This is inspired by the famous Brazil Carnival, reputed to be the best in the world.
Hotels are always fully booked before the 32 days festival, which usually begins in November and runs through December, ending in January 1st. Most residents in Calabar use the opportunity to make extra income by renting out their rooms to visitors who are unable to find hotel accommodation.

Equally awe-inspiring is the Argungu Fishing Festival in its 81st year. It is a four day all-male competition among fishermen of the area to determine who catches the biggest fish. The festival takes place at the Matan Fada River in Argungu, Kebbi State.

There is also the Osun Osogbo Festival, which usually takes place in July and August of each year in the sacred forest of Osun and lasts for a week. It is used as an occasion to honour the river goddess, Osun of Osun State.

The festival usually attracts thousands of people from the area and Osun indigenes in Diaspora every year.

Others are the New Yam Festival, celebrated by the Igbos of South-East Nigeria; the Onitsha Ivory Festival held to celebrate holders of the expensive elephant tusk among the Igbos; Eyo festival, a Yoruba festival unique to Lagos indigenes; Sango festival held in honour of Sango, Omoekun (“son of a tiger”).

In the northern part of the country is also a festival called the Sharo Festival, celebrated among the Jafun Fulani. It is a traditional rite for young men featuring intense flogging meant to demonstrate strength.
The venues of the festivals achieve their peak of activities and life throughout the duration of the festivals but not afterwards.

“The city becomes silent and lifeless as soon as the festivities are over,” a stakeholder in hospitality business and member of the Cross River State Hotel Owners Association, Mr. Eyo Ita, says with a sigh of regret.

Ita, who is the owner of the Green Valley Hotel and Municipal Gardens, Calabar, laments the lack of continuity and efforts to keep visitors entertained after the Calabar Festival.

He believes there are so many other tourist attractions to keep visitors in the state beyond the festival, adding that unfortunately, these tourist sites have become shadows of their former selves.
“The road leading to the Obudu Cattle Ranch, one of the best in Africa in the past, is in a serious state of disrepair and the ranch itself is struggling to survive,” Ita says.

Government, Ita notes, needs to advertise Nigeria’s tourists sites and festivals the way other countries are doing so that people can be more aware of their existence.

Hope for Revenue
Analysts have observed that tourism is a huge revenue earner for countries who embark on it.
According to the Acting Director-General, Standards Organisation of Nigeria, Dr. Paul Angya, despite terrorist threat and natural disasters, international trade in tourism services has grown spectacularly since the 1970s.

He says from a paltry figure of 166 million worldwide international tourist arrivals in 1970, the figure increased to 1.035 billion in 2012.

He says, “The 2012 visitors spent $1tn on travels excluding international passenger transportation expenses valued at $213bn. Directly and indirectly, their spending accounted for nine per cent of the world’s Gross Domestic Product and six per cent of its exports.

Despite the role of tourism in economic development, West Africa has continued to lag behind in the sector.

The 2015 edition of the annual report on competitiveness in travel and tourism released by the World Economic Forum indicates that West African countries are among the least globally competitive countries in terms of tourism.

Angya observes that the ranking shows that there is still low attraction for Africa as a destination for international tourism despite the abundant natural and cultural endowments. “To date, only Ghana and Senegal have passed the significant threshold of one million international tourists. Nigeria, which passed the threshold in 2008, has fallen below since 2011,” he notes.

According to analysts, the reason for the poor performance include limited accessibility in terms of airline traffic, shortage of hotels, skilled staff, inadequate service and production standards required to compete at international travel industry market in terms of hygiene, quality and safety, security concerns, political frailty and health threats.

What needs to be done?
In his paper ‘Our Heritage, Our Destination in a New Economy’ delivered during the maiden edition of the New Telegraph newspapers economic summit, an ex-Director-General, Nigerian Tourism Development Authority, Segun Runsewe, noted that the present economic realities necessitated a strengthening of hitherto neglected sectors to evolve and consolidate the economic base of the nation.

According to him, specific attention must be given to the tourism sector in the process of diversification, adding that the sector has shown greater prospect than oil. “While oil is exhaustible and has some negative effects on our environment, tourism is sustainable and environmental friendly,” he said.

Also, a business strategist, Emeka Ugwuoju, urges the government to put in place structures that will encourage tourists to visit Nigeria.

According to him, the environment has to be safe and the services have to be affordable. “Majority of tourists worldwide are not people who have too much money but people who have small money and want to travel,” he said.

Also an industrialist and chairman, African Centre for Business Development Strategy and Innovation, Sam Ohuabunwa, while noting that there is huge potential in the tourism sector, urges Nigerians to adopt better attitude in the treatment of visitors.

He says, “Let us take business tourism, for instance, this country is attractive. There is large population, large market, and fairly broad middle income professionals. All we need to do is to make it a pleasurable experience for people coming for business. It is essentially attitudinal. Let us try to simplify things. Nigerians like to make things complex.

“Tourists will come here if we can adopt more welcoming attitude right from the airport. Let there be a band waiting to welcome them into the country, like it is done in other countries. Tourists want to see something different from what they are used to. As long as you guarantee them safety and a welcoming hand, even if you don’t have too much infrastructure, once the environment is welcoming and neat, people will visit.”

He added, “We have festivals in every region that we can chronicle and advertise to people. But when they come, will they be welcomed at the airport? Will somebody treat them nicely at the airport? Will they get a decent taxi that will take them to where they are going without anybody robbing them or charging them or playing tricks around?”

For the Director-General, National Institute of Hospitality and Tourism, Mrs. Chika Balogun, tourism and hospitality should not be left out in the lexicon when people are talking about the economics of business in Nigeria.

According to her, in addition to research needed to grow the sector, the government should be encouraged to impose tourism tax as it is done in Dubai and other tourism-centred countries.