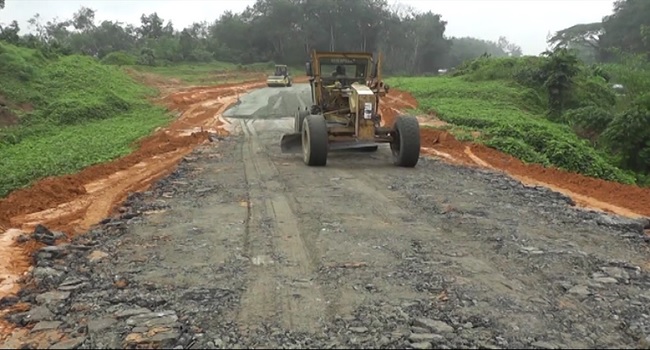 The repair is to forestall a major disaster from happening to commuters plying the route.

Minister of Works, Power and Housing Babatunde Fashola Speaking at the Calabar -Odukpani Federal Highway in Cross River State said, in three months from now, the road will be certified ready for usage again.

But an alternative route is presently being created where movement will be channelled through upon completion of the main road.

The repair work began less than 48 hours after the plight of Motorists plying the Calabar -Odukpani highway was brought to the public by the media. The photo that went viral on social media

The Federal Highway is the only entrance and exit route in and out of Calabar, the Cross River State Capital and more delay at working on the road would have meant cutting off Calabar from other parts of the Country by road.

The representative of the Minister of Works, Roads and Housing while briefing journalists at the site assured that, in three months from now, the rehabilitation work will be concluded.

According to the Assistant Director Ministry of Works and Power, Eng. Bassey Nsentip, “While work will be ongoing at the failed portion, a diversion route is also being created to channel movement through, he said.

The Contractors handling the repairs assured of quality delivery of the project in the shortest possible time.