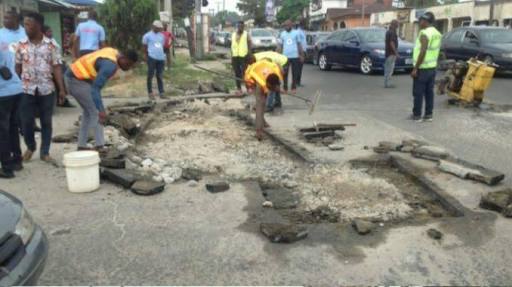 The Cross River State Road Maintenance Agency has commenced the rehabilitation of bad portions of road along the 12 kilometer carnival routes and other areas within Calabar metropolis.

Oqua Edet-Oqua, Director General of the Agency, disclosed this on Thursday in an interview with the News Agency of Nigeria in Calabar.

He said that the agency embarked on the repairs because of the importance of the routes to the carnival.
According to him, the agency usually carries out repairs of potholes within the state metropolis every December to make the roads motorable and fit for the street dance.

Edet-Oqua said: “If you drive along the carnival routes and other major roads in the metropolis, you will agree with me that they have actually started work.

“Some of the potholes have been marked while others were applied stone base and are waiting for the pouring of asphalt. “Between now and the early part of December, we are hoping to complete the entire work. We are also working on other parts of the state because we believe that the yuletide season in Calabar is of most importance to us.

“I am giving you my assurance that the roads along the carnival routes will be ready for use in due course and the carnival participants will have a better road to dance on.’’

He explained that the maintenance and rehabilitation of major roads, especially the ones on the carnival routes had become a routine activity of the agency every December.

He said; “It is a common knowledge in Cross River that before the carnival, all the roads are given attention and we will try to ensure that everywhere is clean before the main event.’’

A NAN Correspondent, who visited Marian road, IBB way, Mary Slessor and MCC road which are along the carnival routes, observed that the pot holes were all marked for repairs.

NAN reports that heaps of laterite was also dropped at major points along the routes for the rehabilitation works.