First Bank Brings Back The Fun in Calabar Festival 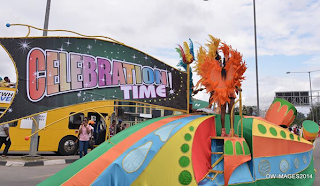 First Bank of Nigeria Limited has again pledged support for the Calabar Carnival 2014. The month-long Carnival is a platform for showcasing rich Nigerian heritage and the Bank is proud of its longstanding association with the annual festivities. FirstBank has partnered with the Cross River State Government in the execution of the Calabar Carnival for the past seven years and this partnership has given the Bank a good platform to showcase its love and appreciation for the arts and culture, whilst bringing happiness and excitement to Nigerians.The 2014 edition of the festival themed "Celebration Time" marks the 10th anniversary of the carnival and FirstBank is proud to have played a lead role in bolstering commercial activities and economic development at the events. The Bank is also a proud sponsor of several activities during event as part of its corporate responsibility towards the development of tourism, arts and culture in Nigeria.FirstBank's spokesperson, Folake Ani-Mumuney said the Bank is delighted to support the Calabar Carnival as it resonates with its desire to see the nation enhance its tourism potentials and its cultural heritage whilst promoting the diversification of the economy."FirstBank as a heritage brand is always keen to align with activities and causes that project the values of the nation in positive light across the globe. We are proud of the achievements of the Calabar Carnival over the years and remain committed to supporting the festival as well as partnering with similar events that have the potential of enhancing the country's status on global ratings. Our involvement with the carnival since inception has raised its profile amongst local and international tourists who yearly look forward to enjoying the Bank's technology-driven products and services," she said.Some of the activities sponsored by FirstBank this year include the tree lighting ceremony, governor's masked fete, theatre performances, musical concerts, golf tournament and the climax of the events being Africa's Biggest Street Party – the carnival proper which will take place on Saturday 27, 2014.Since its debut in 2004, the annual Calabar Carnival has become a benchmark for other state carnivals. It's arguably the largest cultural Festival in Africa with over 50,000 Costumed revelers, more than 500,000 spectators and an audience of over 50 million television viewers on NTA Network, NTA International, AIT and other satellite broadcasting stations (Africa Magic, Channel O and MTV Base). "FirstBank has continued to play a pivotal role in the carnival and we look forward to welcoming everyone again to the 2014 session, especially to the events sponsored by FirstBank, where they will have the opportunity to meet the Bank's team of financial and investment advisers" Ani-Mumuney stated.And if you Can't be in Calabar for the Carnival? Not to worry FirstBank is putting YouFirst and ensuring you get all the updates with the hasgtag #MyFirstCalabar on all social media platforms.