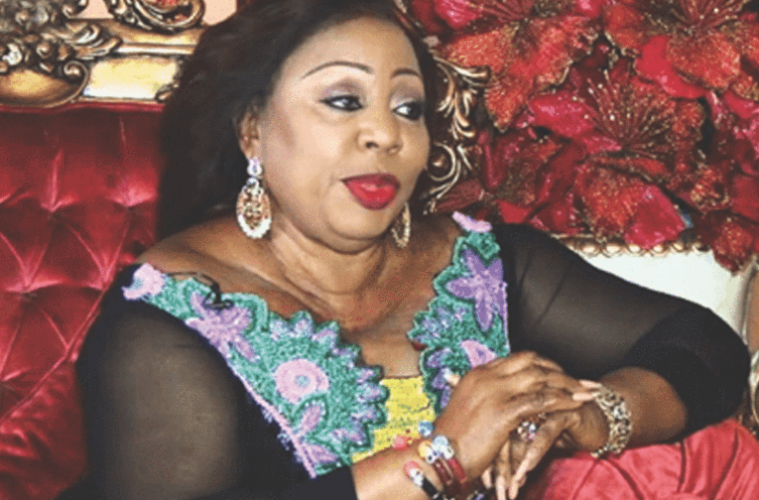 By her stature as Mother of the Efik Kingdom, Senator Florence Mayen Ita-Giwa has spent much of her life promoting Efik culture, most times at her own expense. Nseobong Okon-Ekong reports on the first edition of Abang Cultural Festival, which Ita-Giwa recently launched in Calabar

The plan was not for me to enter her bedroom. We had postponed the interview a couple of times. Another time was set for 10 O’clock in that morning. The previous evening, Senator Florence Mayen Ita-Giwa spearheaded a renaissance of Efik culture, particularly, of the womenfolk on the platform of Abang Cultural Festival. “It is easy to assume that only the men promote or sustain our culture through Ekpe and other masquerades, but that is far from the truth. Efik women have a lot of very lovely cultural dances that are almost going into extinction,” Ita-Giwa said last week at the premises of the African Club. “During the big festivals in December, for instance, much of the cultural displays on the streets of Calabar are promoted by the men. The cultural dances of the womenfolk like the Abang and others are gradually fading away. I don’t think that should happen. We have to preserve some of these things for our children.”

By her stature as ‘Eka Iban ke Essien Efik Duopeba’ (Mother of the Efik Kingdom), having spent much of her life promoting Efik culture, most times at her own expense, she also founded a socio-cultural group, ‘Mbono Iban Isong Efik’ comprising some of the leading Efik women from all walks of life including senior lawyers, successful business women, professionals and academicians. At 72 years, she is never scared to jump over the barricade of any challenge that life throws at her. Enterprising and always thinking of new schemes to retrieve any moribund social order back on the right track, she moves around with the confidence of a champion.

When the first edition of Abang Cultural Festival kicked off, Ita-Giwa announced to a cheering gathering her wish to return as an Efik woman should there be reincarnation. She told them matter-of-factly, “Efik women are peace loving, caring, prepare great meals, which is why when men from other ethnic groups come here, they don’t want to go. It is nothing to do with ‘love portion’.” It would not be the only myth she either debunked or strengthened in the course of our interaction. While the men and women echoed her sentiment, she waited for the din to die, before making a passionate appeal to the youths of the land. “Stop the violence. Stop the bloodshed. Efiks are not known for violence.”

To honour the event, the Obong of Calabar, Edidem Ekpo Okon Abasi Out V was represented by his wife, and Etubom Bob Duke, Chairman, Etubom’s Traditional Council, who chaired the occasion. Some of the very important guests at the event were Chief Effiong Edet, Prof. Edisua Itam, Ntukae (Mrs.) Afi Ikpeme, Princess Victoria Adang, Hon. Nkoyo Toyo, Prof. Eka Braide and Mrs. Andem Rabana. Duke who emphasized on the importance of peace in Efik land while commending the effort of Ita-Giwa and her team, also expressed confidence that with the cohesion of professional and distinguished Efik women, it will be easier to rally their support for the Efik monarch.

Two members of the MIIE, Professor Braide, a former Vice Chancellor of the Federal University, Lafia, and Professor Itam, were hopeful of what the association in general and the Abang Festival in particular could achieve for the cultural landscape of Calabar. Both women said nothing to compare the Abang Festival to. “We have seen individual groups moving around town, but this is like an assemblage of so many groups competing. This is the first time I am seeing this. It is an exhibition of the cultural heritage of our people, with the various dance groups really showing what they are good at doing, the costumes, the dances and the history behind the dances.” Itam, a Bio-Chemistry teacher at the College of Medicine, University of Calabar, referenced the crowd, the enthusiasm and the excitement at the festival. She said, “Some of us have never seen these plays. It will encourage our children. This will really encourage other aspects of our culture.”

The MIIE was formed by Ita-Giwa for the funeral of one of the icons of Efik land. Thereafter, the group decided to stay on and effect some socio-economic development in Cross River State and the Abang Festival is one of them. The group may consider making the Abang Festival an annual event that will grow bigger.

Chief Charles Okon, President of the African Club, founded in 1903, the oldest club in that part of the country said he was honoured that his facility was chosen to showcase a revival of women dances in Calabar. “The club supports cultural activities and promotes socialisation at community level. This has to do with people coming together to celebrate what they inherited and hold very dear. Senator Ita-Giwa is a honourary member and a patron of the club. She has been quite supportive of the club and we hold her in very high esteem.”

For the first edition, there were 11 competing and five non-competing troupes. Their performance was scrutinized by a team of judges chaired by Head of the Theatre Arts Department, University of Calabar. Perhaps, due to the announcement of the festival in town, a few masculine-centred masquerades were at the grounds of the African Club and out of courtesy, the organisers allowed them a short time parade before the crowd. But everyone had come out to see dances by the women folk. Interestingly, women of all ages turned up.

Although, it was a non-competing group, a team of children of between three and six years stole the show and won an instant cash prize of N100, 000 from Ita-Giwa. The first position was won by a group of market women who performed the ‘Ukwa’ dance. They took home N150, 000. The second and third place winners were rewarded with N100, 000 and N50, 000 respectively. However, no participating group was allowed to return home empty handed. They all went away with cash prizes between N25, 000 and N10, 000.

According to the head judge, the evaluators were looking at uniformity, character, costume, use of space and rhythm in scoring the overall performance of the groups. The ordinarily known Abang is that which the dancer is distinguished with a spool around her waist and a colourful headgear. The attractiveness of the dance is displayed in the femininity and sexuality that the dancers demonstrate. The Abang Festival also offered a platform to a variety of other female dances like Ekombi and Ntimi.

Since the increasingly popular Carnival Calabar started and Ita-Giwa became the leader of the one of the competing bands, Seagull Band, creative genes have been fired to appreciate her past. In one of her presentations, she was accused by pastors and some Christians of trying to bring back the worship of the ‘Queen of the Coast’ a water deity believed to be half-woman, half fish), sometimes called ‘Mammy Water’. But, she said, she is very spiritual and had challenged the Christians to show who was better blessed by God.

“I don’t believe in witchcraft or ghost. I don’t believe in juju. I believe in God and I am a Christian. My parents were Christians but my mother encouraged me to take an interest in our culture from my teenage. Twice I have performed a very sacred role at the passing and the coronation of the Obong of Calabar. It is usually reserved for first daughters. At Obong’s death, if you are chosen for the role, the chief come for you at 12 midnight, you have to wear black and go round all the ruling houses till about 5 O’clock in the morning. At the entrance of each house, you must wail and say that your father the king is dead. The other role is at the coronation of the king, you are adorned in white and you go round strategic place in Calabar to announce peace and prosperity at the installation of the new king. It is height of ignorance to try to kill your culture. Religion is a very personal thing and some of these people do what they do for personal interest, not for the love of God. They should learn how the Efik accepted Christianity.

The missionaries formed some kind of friendship with the leadership of the Ekpe society and Ekpe was used to coerce the people to church on Sundays. The most revered church by the Efik, the Presbyterian Church in Duke Town, is across the street from the Ekpe Shrine and the Obong must attend both the church and the shrine at his coronation. I built an Ekpe shrine in my compound to honour the memory of my father. Though Ekpe is not supposed to enter a woman’s compound, I open my gate January 1 every year. They have to pay home to me as the Mother of the Kingdom.”

One question that Ita-Giwa would not give a direct answer to is her relationship with ‘Mammy Water’. “I believe the only incision on my body is the one made by my grandmother when she thought I was actually ‘Mammy Water’. I was told that as an Efik woman, Mammy Water is my heritage. I have never seen Mammy Water. I don’t know what it looks like, but from images by artists, I was able to conceptualise the presentation at Carnival Calabar, which was a play by Lilian Bach. Monalisa Chinda was to play the role. I think she got scared. I had to take her to the Mammy Water shrine so that she would understand what was expected of her. The story of Efik migration, in part, states that Mammy Water guided the Obong of Calabar to where the Efik settled in Creek Town. I do not think Mammy Water is a malevolent spirit like witchcraft.”

Ita-Giwa’s home could be described as a house of mirrors. There are glasses that reflect everywhere you turn. On her massive bed, with a headrest in the shape of 16 flower petals, each one has a mirror, apart from the mirror on the walls. She explained her attraction to anything that throws back her image. “I like to look at myself. I also like space. I cannot get enough space and mirrors give an illusion of space.”

Her phone kept ringing for the duration of the interview, even as different aides interrupt our discussion. But she showed the utmost courtesy because she had postponed our meeting more than once. It was well into early afternoon, but she was still in her nightwear. She told me she went to bed late because she had to attend to ailing daughter, Betty, one of the children she adopted from the creeks of Bakassi. Betty who is named after her late mother, was the reason she slept late. Betty was also the reason she had to stop talking to me. But, it was fair. After all, we had been talking for close to three hours.