Forms Are Out For The Carnival Calabar Queen (CCQ)Pageant 2014 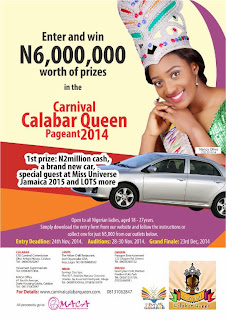 The 2013 edition saw the emergence of Nancy-Olive Aisagbongi, who has been the ambassador for tourism in Cross River State and as well as the face of Mothers Against Child Abandonment (MACA), an initiative of Her Excellency, the wife of the Governor of Cross River State, Mrs. Obioma Liyel Imoke.

The Carnival Calabar Queen Pageant (CCQ) is an annual pageant that holds in Calabar every December, a couple of days before Christmas. This year promises to be more exciting as mouth-watering prizes have been lined up for the winner and the runners up.

The lucky winner will walk away with a brand new car worth N4million, N2million cash prize, one year clothing supply, makeup supply, trip to Jamaica, and one year accommodation in the Government lodge. The first runner-up will get five hundred thousand Naira (N500,000.00) and second runner-up takes home two hundred thousand Naira (N200,000.00).Forms are out and are available at the rate of five thousand Naira only (N5,000.00). Forms can be bought at Springs Day Spa, Abuja, Value-Mart Supermarket on Marian Road and M. Mohammed Highway, Calabar and Tourism Bureau, Okoi Arikpo House, Calabar.Payment for the forms should be paid into this accountAccount Name: DCC ProjectAccount Number: 2014572784Bank Name: First Bank PlcThe contest is open to all Nigerian ladies between the ages of 18-27. To qualify, participants must have spent one year in the university and possess a minimum intelligence quotient of 70%.Ticket sales and funds from fundraising from the pageant will be donated to Mothers against Child Abandonment (MACA). The Organization, among other things, caters for abandoned babies and also implements abstinence based programs in a bid to reduce the rate of teenage pregnancy in the state.The Carnival Calabar Queen (CCQ) Pageant  is part of the activities marking the annual Calabar Festival which is an initiative of the Cross River State Government. The festival aims at developing the Tourism potential of the State and attracts tourists from all over the world.The sponsors for this year event are Mega Hilton hotel, Yellow Chilli, Springs Day Spa, Minds of Creation, Cross River State Tourism Bureau, and Surefoot America International School.