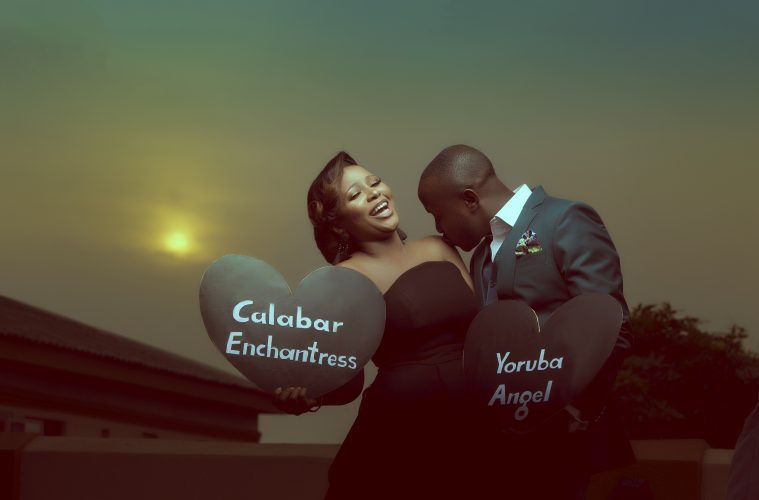 This is a beautiful and funny story of how one awesome man; Dami‘s desire, determination, attention to detail and persistence got him out of an equally fantastic woman; Confidence‘s Friend zone and right into her “I will Love forever” zone! It is so inspiring and encouraging. Trust me!

The entity of their juxtapositioned pre-wedding shoot is so beautiful, reflecting wholly the chemistry they undeniably share!

How We Met
From the bride, Confidence
Believe it or yes, Samuel Staveley’s escape from my high-fenced friend-zone is a classic 8th wonder of the world. The love of my life had been disguised as my paddy for so many years and I had no clue. Papa God you for show me small expo for this one nah…Lol

On a more serious note, though, Dami and I met during our final year at the University of Middlesex, Dubai campus. Putting it mildly, everyone but me knew he had an eye for me but Dami never made a move. Ok, scratch that, I knew he had a thing for me shaaaaaaaaa, but I didn’t take him seriously because I never caught him staring at me lustfully or saw him mushed up when we talk.

You can blame my last sentence on all the romantic movies that had put these as the standard signposts of a guy crushing on a girl, but you get my point abi? See eh, the best Dami did was casually tell me one hot afternoon, that I will be his wife someday. That day I laughed like Sarah in the bible laughed when she was told she will conceive and bear a son at 90. In my head, I was like,

That day I laughed like Sarah in the bible laughed when she was told she will conceive and bear a son at 90. In my head, I was like, “shey this boy wants to mess about with me, abi I resemble mumu for him eye?”

Six years had gone by and we had become cool buddies, but I had no idea Dami was simply staying active in the background of my life, waiting for the perfect intersection of time, chance and readiness. To his glee, I became single in 2015, but still, this Mr. didn’t make his move immediately (or at least so I thought till I read his own account below…hahaha).

He only got closer to me, now that the coast was clear. He will randomly say stuff like, “Babe I dey come for you o, make my shit strong first”. Again in denial, I will laugh loudly and wonder what he was talking about.

We are both foodies so he started taking me out to enjoy meals at different restaurants. Please remember that he was so deep in my friend-zone that he will drop me off and we will not even hug each other. Last-last we will chop knuckle or give each other a high five to say goodnight. Yes! it was that bad. For someone like Dami who jokes a lot, I also didn’t know what to make of his consistent efforts to spend time with me or his show of kindness when he, for example, made sure my generator didn’t lack fuel throughout 2015-2016 recurrent fuel scarcity. Don’t you dare laugh!

Talking about fuel, you remember that joke/skit that trended last year about toasting a girl with a keg of fuel? Looking back in retrospect, that was so us!

I enjoyed his company each time we hang out and dismissed any thought of him wanting something special. I interpreted his kind gestures as him being his normal caring self I had always known even though I knew deep down in my heart that he had stepped up his game and this level of kindness wasn’t normal.

Well, if this was his strategy, then it is safe to say that it worked very well for him because he grew on me and we became fond of each other without my conscious’ acceptance of the progress in our relationship.

In May 2016, on my birthday it was literally raining cakes at my office. As a fine girl nah(*wink wink). I received so many gifts and cakes than I knew what to do with but Dami’s gifts stood out! It was at this point that I knew that I couldn’t deceive myself any longer. I knew he definitely wanted something!

He had read an article I wrote where I gushed about my favorite confectionery store and mentioned my favorite flavors. Dami ordered my birthday cake from that store and the bespoke cake stacked all those flavors and textures! (Side gist: I just had a foodgasm from the memory of that cake effortlessly melting in my mouth *swallows saliva*).

He also went through my Instagram page and noticed most of my outfits were from a particular ready-to-wear brand, he contacted them and ordered stuff for me etc. So you see, I love gifts a lot but in this scenario what got me wasn’t the value or beauty of the gifts, it was the thoughts that this awesome man had put into pleasing me without asking me a single question!

Simply put, he did his homework well. I resolved to reduce my shakara and give him more attention than I had done in the past.

We started going out even more often and in July 2016 he reminded me of what he had told me in University when he said he was ready. This time, I didn’t laugh in disbelieve; I asked myself questions, answered them and told myself some hard truths. I had unknowingly started falling for this guy. I prayed about it and on the 28th of August, I told him, yes and we officially started dating.

How We Met
From the groom, Damilola
I met Confidence in 2010, we were University coursemates. No, this wasn’t love at first sight and I wasn’t exactly looking for a wife at the time but as time passed in school, I went from noticing her to deeply admiring and respecting her so much that my boys teased me very often about her.

She was that cool efiko who will show up in class looking beautiful and beaming smiles all around but omo when it reach to show working, nah over deliver go dey worry her, lol.

I wanted some of that gray matter passed on to my kids so I earmarked this jewel to be my wife but didn’t want to mess things up by dating her at that time. Before we left our University, I planted a chip on her to keep track of everything happening in her life. I was joking about the chip part though but I kept a close watch on her.

She went to the UK for her Masters a year later and although I had planned to also go for further studies around the same time and in the same city with her (partially because I wanted to still be in close proximity to her), things didn’t work out financially for me. So by the time I made it to England for my MSc, she had already wrapped up and left.

During that period, I became her most obsessed invisible online stalker. Her timeline and display pictures were my TV channels.
This might come off the wrong way but guys will understand what I am about to say. You know that meme that shows some guys dancing with a caption that read “when your crush breaks up with her boyfriend”? that was so me at the time.

When I got wind of her single status In 2015 I jumped on the opportunity to make this amazing woman my wife. We started off after several months of direct and indirect chasing, those months further solidified our friendship of many years.

I fell so in love with her that within a few months of dating, I asked my Omolewa to marry me. The Proposal
December 25th, 2016 is very easily the most memorable and exciting Christmas yet!
I had low-key started planning our wedding after he told me in November that he wanted us to get married before my next birthday. So the committee in my head advised me, “Babe start planning your wedding before your Oreo springs this big day on you in a short time”.

No dates were fixed yet and no official proposal from the boo but close friends and family knew we were getting married soon. Let me not even pretend to you that I wasn’t expecting a ring o, I was only wondering how he will fair with the herculean task of surprising me.

On Christmas day when he took me out, I thought he was only treating me to a beautiful dinner, not knowing he had painstakingly planned a surprise proposal at Kigali’s finest hotel. When we arrived and were ushered to a private portion of the restaurant with petals on the table and very dreamy decor, I knew something was up. I texted my close friend, Ogochukwu, “Girl I feel strongly in my heart that Dami is going to propose today o. He’s been very jumpy and mushy all day, and for the first time, he took a couple elevator picture and insisted I really dressed up”.

Ogor replied, “Babe now that you’re expecting, it won’t happen”. So I just jejely took a chill pill. He knows from our many restaurant adventures that I’m a main-course-straight-to-dessert kinda girl, so he made his plan around my dessert.

After our amazing main course meal, dessert was served and a small, traditional Rwandan hand-crafted basket was placed beside it. When I enquired from the waitress about what was enclosed in the little basket, she told me it was something I need to eat after the dessert. I didn’t know Dami had arranged with the staff at the restaurant and everyone but me knew he was going to ask me to marry him.

I opened the little basket after I finished my dessert and the surprises started unfolding. The most beautiful part, of course, was when he got down on one knee and asked a speechless me to marry him nah head I nod take answer the question….Lol.
Another sidenote: I misplaced my ring a day before this photo shoot *sad face*

We are so happy to share the rest of our forever together!

Are you planning your big day soon? We are happy to celebrate with you. Get in touch