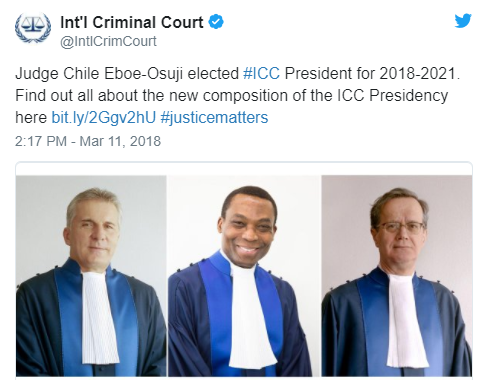 #FROMCALABARTOTHEWOLD: 5 THINGS YOU NEED TO KNOW ABOUT THE NEW ICC PRESIDENT

0 views
News0 Comments0 views 03 min read
On March 9, 2018, Nigerian-born
Chile Eboe-Osuji was elected as president of the International Criminal Court (ICC) in The Netherlands for a three-year term.
As the president of the ICC, Eboe-Osuji will play a key role in providing strategic leadership to the ICC as a whole, while he also provides input into a broad range of administrative policies affecting the court’s overall functioning.
“I am deeply honoured to have been elected by my peers as President of the International Criminal Court. As I take up my duties, I feel encouraged that I am able to rely on the wide experience of the two Vice-Presidents, Judge Robert Fremr and Judge Marc Perrin de Brichambaut, both of whom I have closely worked with previously,” the new ICC declared after his election.
Here are five things to know about Eboe-Osuji’s, a man whose life’s trajectory remarkably saw him through a legal journey from Nigeria to Canada.
BORN IN AÑARA, ISIALA MBANO, IMO STATE
On September 2, 1962, Eboe-Osuji was born to the late Eboe-Osuji, a chief, and Clara Nnenze Eboe-Osuji of  Añara, Isiala Mbano, Imo state. The 55-year-old judge graduated with a law degree (LL.B) from the University of Calabar in 1985. He is married, with three children.
A LOVER OF EDUCATION
Eboe-Osuji holds an LLB from the University of Calabar and was called to the Nigerian Bar in 1986. Thereafter, he proceeded to McGill University, Canada, where he obtained an LLM  and was called to the bars of the Canadian provinces of Ontario and British Columbia in 1993. With further academic quest, Eboe-Osuji obtained an LLD in international criminal law from the University of Amsterdam, The Netherlands.
AN ASTUTE LECTURER
Aside working as a barrister in Canada, the brilliant legal luminary taught international criminal law as adjunct professor at the faculty of law of the University of Ottawa, Canada. Remarkably, Eboe-Osuji is the founding editor-in-chief of the Nigerian yearbook of international law. Suffice it to say, he won so many legal scholarships, while a plethora of publications have been etched in his name.
PROSECUTED RWANDAN GENOCIDE CRIMINALS
In the wake of the infamous Rwanda genocide in 1994, the United Nations Security Council established an international criminal tribunal to try the perpetrators of the 100-day pogrom that saw the decimation of about one million people. Chile Eboe-Osuji was a prosecution counsel and senior legal officer to the judges of the tribunal.
THE FACE BEHIND THE PROSECUTION OF CHARLES TAYLOR
While Charles Taylor, the former president of Liberia held sway, he orchestrated civil wars as a guerrilla fighter. With the arraignment of Taylor for crimes against humanity, Eboe-Osuji was the principal prosecution appeals counsel at the special court for Sierra Leone. Taylor was found guilty in April 2012 by the special court and was sentenced to 50 years in prison.
Join the Conversation!