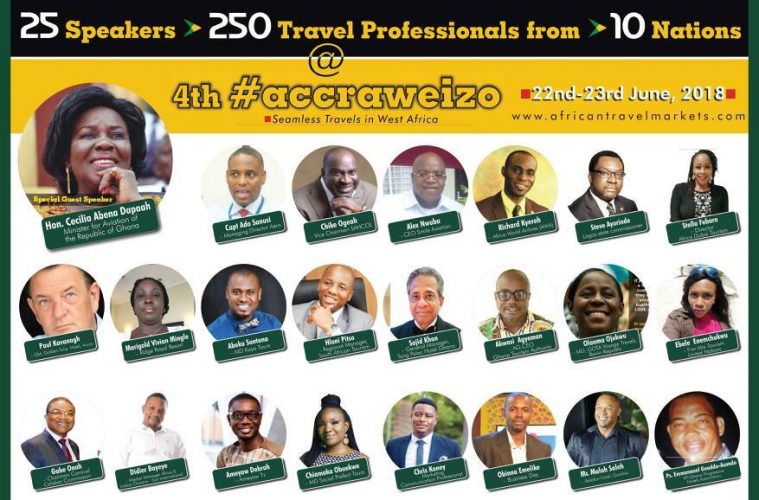 As preparations for this year’s edition of Accra Weizo gather momentum, the organisers of the yearly travel and tourism trade conference and exhibition, which is in its fourth year, has revealed that Ghanaian Aviation Minister, Cecilia Abena Dapaah, is slated to lead the high profile delegates attending the event, which is target on creating synergy for West Africa tourism development and promotion.

The event is bill to hold between June 19 and 23 with a three day familiarisation Tour package to the Volta region for tour operators by Ghana Tourism Authority for delegates and others attending the two days gathering. According to the head of Akwaaba Africa Travel Market and organisers of the travel event, Ikechi Uko, Dapaah, is to formally declare the event open and deliver a paper on: ‘Harnessing the Opportunities in Aviation value chain in West Africa.’ With the poor attention paid to tourism and the attendant non – performance level of the sector in the West coast of Africa, Uko said that ‘‘Accra Weizo is one of the events geared towards getting West Africans to cooperate among themselves, adding that Accra Weizo is a travel event now in its 4th edition aimed at creating a seamless travel environment in West Africa.

‘‘It brings together travel professionals in West Africa. The first day will be the seminar on aviation and the second day will be dedicated to ‘travel, tourism and the internet’ session to grow travel business and destination.’’

He further disclosed that it is slated to take place at La Palm Royal Beach Hotel in Accra, Ghana. Some of the topics to be discussed on the first session of the event, he said include: ‘Interlining in West Africa, a possibility or a Mirage?’; ‘Integrating West African airport system’; ‘Standardising aviation laws in West Africa for regional growth’; and ‘Why West African airlines fail easily and the future,’ the list of confirmed panelists for the session, he said include the Managing Director of Aero Airline, Capt Ado Sanusi, Vice Chairman of SAHCOL, Chike Ogeah, Chief Executive Officer of Ghana based Smile Aviation and former CEO of defunct Associated Airlines, Alex Nwuba, Richard Kyereh from Africa World Airlines.

Atqnews, he said host an award night on the first day were the Top100 Hotels in West Africa would be unveiled and awarded for their excellent products and services delivery culture.

While slated for discussion on the second day, which is hospitality day, ‘The adapting of international hotel standards the African Environment,’ with panelists of experienced hotel managers across Africa, which include: Marigold Vivian Mingle of Ridge Royal Resort at Cape Coast; Pastor Emmanauel Geadda-Asando, Vice President -Ghana Progressive Hotels Association, Sajid Khan, general manager of Tang Palace Hotel Ghana, and Malah Saleh, CEO of Djembe Hotels and Balafon Hotels in The Gambia.

Travel journalism would also be focused on with such topics as ‘How effective are travel bloggers, writers and influencers in promoting travel destinations in West Africa.’ The panelists for this session include the Chairman of Carnival Calabar Commission, Gabe Onah, Lagos State Commissioner for Tourism, Arts and Culture, Steve Ayorinde, Regional Manager, West Africa, South African Tourism, Lehlohonolo Pitso. Acting CEO, Ghana Tourism Authority, Akwasi Agyeman, Ghanaian tourism promoter and CEO of Kaya Tours, Abeku Santana and Nigerian CNN journalist of the Year Award winner and Businessday Travel Editor, Obinna Emelike. Uko further revealed that the line would include a special presentation on the hottest destination for West Africans -Dubai – by the Regional representative (Africa) of Dubai Tourism, Stella Obinwa while Lagos State would its vast and rich tourism attractions on June 23, which is tagged EKAABO Day. Ghana Tourism Authority is also to showcase its flagship programme – See Ghana, Wear Ghana, Eat Ghana on Ghana Day.