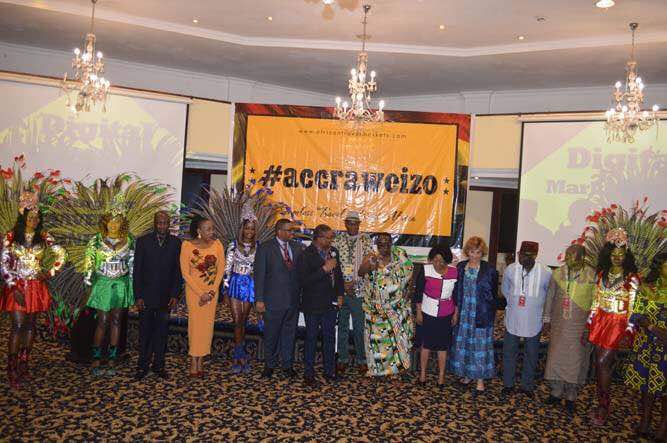 Carnival Calabar dancers once again added glamour to the recently concluded Accra Weizo in Ghana with their scintillating performance and beautiful dance steps that left the audience at the event asking for more.

The environment at the La Palm Royal Beach Hotel, Accra, Ghana, the venue of the travel expo was electrified with the beautiful dance steps and colourful costumes of the carnival dancers, reminding the audience that Calabar is the place to be in December for the biggest street party in Africa.
For three years running now, the Carnival dancers have become a regular feature at the annual Accra Weizo having participated in all three editions. The dancers performed at the main event during the day and at night at the cocktail party hosted by the management of La Palm Royal Beach Hotel, Accra for the participants and other travel personalities that attended the event.

Speaking at the event, the Chairman of the Cross River State Carnival Commission, Gabe Onah, noted that the introduction of food festival, the bikers parade, the international carnival and Nickelodeon for the children by the Governor of Cross River State, Professor Ben Ayade have added another dimension to the carnival and has taken the event to a higher level. He disclosed that the Governor has signed Carnival Lottery Bill which is another innovation aimed at promoting broad participation from all and sundry.

Onah, stated that the lottery which is mobile based is aimed at reaching out to as many people as possible who want to participate and win prices for themselves.

He said the carnival is always innovative in coming out with new initiatives to keep the event growing. He disclosed the theme for the 2017 Calabar Carnival is MIGRATION.

According to him: “Carnival Calabar could be that gateway for the development of tourism in Nigeria. Calabar Carnival could be the door of return for Africans in Diaspora. Calabar is an acronym for Come And Live And Be At Rest”