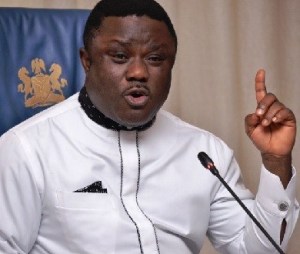 The Governor’s directive, was given after the recent release of a video by CrossRiverWatch where he, alongside his deputy, Professor Ivara Esu were dancing to tunes of hit song “gbe bodie” at Calas Vegas, Calabar.

A government house source who pleaded not to be named informed said that: “the governor was very livid about the the backlash generated by that video and all accusing fingers were pointed at the CrossRiverWatch correspondent, youth corpers and some other reporters in the governor’s press corps.”

24hours after the release of the video, an internal memo from government house was circulated among members of government house press corps, picking out choice media organizations that will be allowed to cover the governor’s activities henceforth.

The internal memo signed by the Information Officer, Nakanda Iyadim, warned against the sharing of text messages or videos of the governor’s activities by any correspondent unless it is cleared by the CPS, Mr. Christian Ita, who was not yet reappointed as Chief  Press Secretary, CPS at the time.

The memo directed that only the 13 people which includes past aides, Messrs Emmanuel Ulayi, Offiong Onoyom and Beatrice Akpala will be part of the Governor’s itinerary. To that effect, the reporters for CrossRiverWatch, Hit FM, FAD FM, Sparkling FM, NTA and Radio Nigeria will sit and wait for their colleagues as they were not listed in the memo.

His Excellency, the Digital Governor has directed that henceforth, only the underlisted persons should be part of his itinerary:

Furthermore, no textual (press releases), photographic and video materials must be sent out to the public without the permission and clearance of Mr. Christian Ita.

All concerned persons must adhere to this directive, failure of which will attract severe consequences.

Office of the Governor.

For weeks now, CrossRiverWatch Government House Correspondent, Efa Sunday, has been removed from the Government House communication channels. She has reported incidents of hostility in the governor’s office and complained about attempts to make the office uncomfortable for her.

Our newsroom contacted Mr. Christian Ita who disowned the internal memo saying it was written while he was not yet reappointed.

When Mr. Ita was asked if the correspondents can resort to using the vehicles of their individual media organizations or the vehicle belonging to the Association of Cross River Online Journalists ACROJ, Ita remained evasive. He however assured that relations will normalize now that he has been reappointed.

While reacting to the development, CEO of FAD FM, Fidelis Duker, told said that: “My staff came back and told me about the development and I have been very upset. This government is becoming a joke. I have warned them all that I don’t want to see any of them near the government house until we are given explanations why that decision was taken in the first place. FAD FM has it’s vehicles and if we need to follow the governor, we don’t need their bus. They are not saying the truth.”

General Manager of Sparkling FM, Mr. Effiong Nyong also expressed dismay at the directive of the governor. Mr Effiong told said he was taken aback by the directive and hoped that it was only a joke.

While also responding to the Governor’s decision, the Association of Cross River Online Journalists (ACROJ) Chairman, Comrade Darlington Edem said “This is against every known law guiding journalistic practice anywhere in the world. We must rise in unity against such dictatorial tendency.”

In his own reaction, the Editor-In-Chief of CrossRiverWatch, Agba Jalingo described the decision of the governor as draconian and vowed to resist it.

“Governor Ayade thinks he can reinvent the wheel. He can’t. Let him learn from history and save himself from this needless procession to Golgotha. This his decision is an anti-climax to the gains made to ensure a truly free press in Cross River and Nigeria; which is the panacea to the myriads of challenges facing the common man.

“The Governor’s decision to chase out the correspondents for CrossRiverWatch, Hit 95.9 FM, FAD 93.1 FM and Sparkling 92.3 FM in a systemic manner only begs questions of his motives. How does a Governor noted to drive a convoy with up to six empty vehicles each time, expects the public to believe that there is no vehicle to convey these group of reporters to perform their constitutional duty?

“It is clear that the Governor does not want a truly free press in the State. Whether this is a move to censor information from the Government House or is an attempt to subtly stifle the press, we remain resolute in our resolve to report news, views and analysis in a manner in line with the ethics of the profession,” Jalingo said.

The Press Corps at the Government House Calabar, consists of 15 journalists from 10 different media outfits.