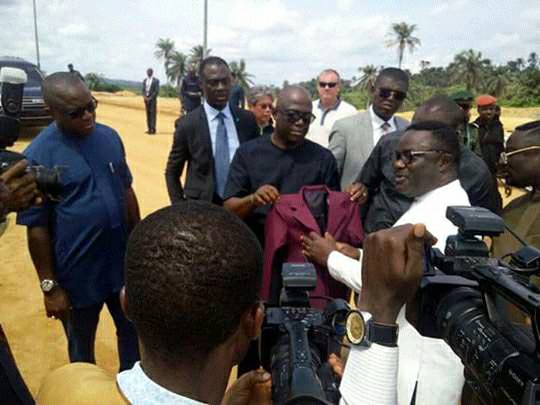 His Excellency, Governor Ben Ayade has said that henceforth, political appointees will be mandated to wear clothes manufactured from the soon to be commissioned Calabar Garment Factory.

According to Thisday, the governor also said that by the end of June, anything he puts on, will be made from the garment factory.

The governor made this known on Thursday while briefing journalists after he was shown samples of some clothes made in the factory.

“The garment factory today is a reality and it’s now producing in commercial quantities for export too…. Henceforth, starting from today, all executive members, all appointees must be in clothes made from Calabar Garment Factory and this is official.

By the close of next month, anything I put on my body will be made from Cross River Garment Factory. That is my sincere commitment to the state and for the 3,000 young people working in the factory.

Cross River is a leading state when it comes to lifestyle. So, definitely we are going to be leading in terms of fashion.

We are expanding into uniform production for school children, and as you are well aware, we have had people from neighbouring states asking us to produce uniforms for them in hundreds of thousands. We are focused on getting the very best in the garment factory and of course, the school uniform. On the raw material source for the factory, the governor said:

I’m sincerely proud of what we have done and of course, and in the second phase when we are go back to the cotton farm project, we will definitely be producing with fabrics made from Cross River farm.

For the cotton farm, we are partnering with Arewa Cotton. So, the farm is in full gear and by next week, we are going on a tour of the cotton farm in Northern part of the state.