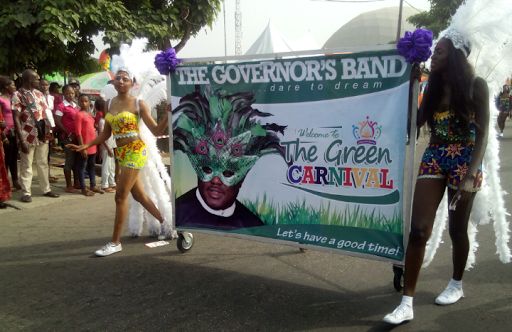 As preparations for the annual Carnival Calabar intensify, the Governor’s Band has unfolded plans to add spice to the carnival by increasing the scope of its participation.

According to the Coordinator of the band, High Chief Edem Duke, “This year, the Governor’s Band will be involved in the interpretation of every element of the theme of the Carnival which is Migration, with a substantial increase in the number of revelers. However, the band still remains a non-competing band.”

The main event of the Carnival which is a twelve kilometer street parade is a competition between five bands namely, Passion 4, Seagull, Masta Blasta, Freedom Band and Bayside Band.

Prior to now, the Governor’s Band had limited participation within the Carnival with membership exclusive to friends of Cross River. However this time around, the membership of the band is expected to be boosted considerably as participants will include prominent stars from the entertainment world, business leaders, government functionaries and high net-worth individuals.

Elaborating further, Duke said; “The Governor’s Band is the brand ambassador band for the Carnival. It is supposed to reflect its vibrancy, inclusiveness, glamour and boisterousness. It’s supposed to be the DNA of the Carnival Calabar in its entirety and reflective of Governor Ben Ayade’s vision of dreaming a new dream for the Carnival and the state in general.

“This informs the inspirational philosophy of the Governor’s Band which is Dare to Dream. Dare to Dream is the rallying call that whatever circumstances Cross Riverians find themselves in, they should always dream because if you can dream it, you can achieve it,” Duke said.

“In effect, the Governor’s Band is supposed to aggregate the spirit of all the other bands, and promote the new vision of the governor for Carnival Calabar and propel it into a place of prominence among Carnivals around the world.”

This edition marks the third consecutive year of the Governor’s Band’s participation in the Carnival. The band is one of the many innovations brought into the Carnival by Governor Ayade. Another is the Biker’s Carnival which is expected to be bigger and more glamourous than ever. “The Biker’s Carnival will be further accentuated within the main Carnival this year,” Duke revealed. Speaking further, Duke encouraged more Nigerians, especially those in the higher strata of society, to participate in the Carnival like it is done in other climes that have embraced the carnival culture. According to him, it is not unusual for Presidents, Prime Ministers, Governors, Mayors and other top functionaries to let their hair down and join the people in interpreting the theme of the Carnival. This is because the Carnival is not just entertainment and revelry but also has impacts positively on the State’s economy.

The Carnival Calabar has grown in leaps and bounds every year since its inception, with each successive carnival raising bar. The Carnival will enter its 14th edition this year and would be the highpoint of a month-long festival in December.