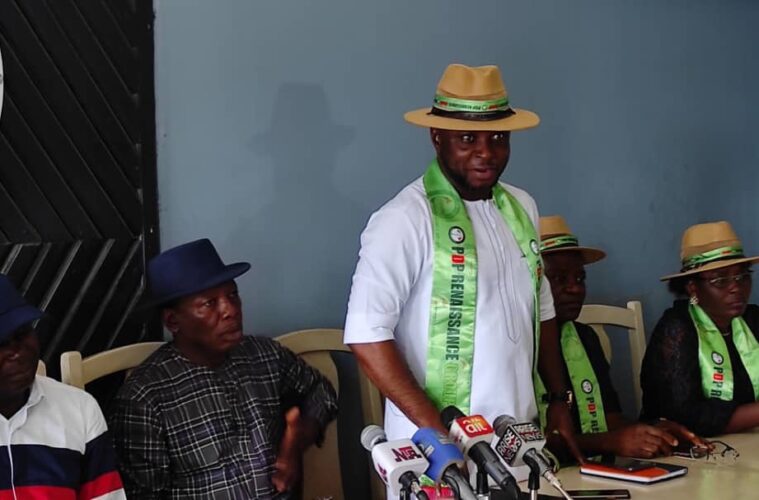 The call was made at the end of a high level stakeholders meeting of the PDP Renaissance Group held on the 9th of November, 2021, at the PDP Secretariat in Calabar.

The PDP Reinasance Movement is a political think-thank group, and has former local government council chairmen, serving and former legislators of the Peoples Democratic Party, former Special Assistants as well as former Commissioners as members.

In a communique issued at the end of the meeting, the group said it was imperative to take a stand on its preferred candidate for the 2023 presidential election, and has has found Rivers State Governor, Nyesom Wike as a perfect fit.

It noted that the move was necessitated out of passionate expectation of Nigerians for good and enduring leadership; having been disatiisfied with the rudderless leadership provided by the APC in the last six years.

The group stated that, the choice of governor Wike was borne out of his bold character, quality leadership disposition and deep content.

While calling on the PDP to present a man with character and content as flag bearer for the party’s Presidential ticket in 2023 in order to further strengthen the faith of the people in the Nigerian polity; the group described Governor Wike as the messiah they have found to salvage the country from the quagmire it is currently experiencing.

Excerpts from the statement reads: “Rising from a meeting at its office in Calabar, The Cross River State Capital, The PDP Reinasance Movement has against the background of the clarion call and passionate expectation of Nigerians for good and enduring Leadership; having been disatiisfied with the rudderless leadership provided by the APC in the last six years, resolved amongst other issues, to call on Leadership of The PDP to present a man with character and content as flag bearer for the party’s Presidential ticket in 2023 in order to further strengthen the faith of the people in the Nigerian polity.”

The group also commended the leadership of the Party, especially the PDP Governor’s forum, for the conduct of a successful, peaceful and ranchor-free National Convention of the party and urgeeld the leadership to consolidate on the gains of consensus building process, recorded at the convention, to narrow down interests ahead of the 2023 elections.

The group further notes in particular, “the sterling leadership qualities and developmentmental strides of the Rivers State Governor, His Excellency Barrister Nyesom Wike, and after a careful prognosis of the political situation in the country, characterized by high level insecurity across board, rising banditry, the plorifiration of secessionist groups currently threatening the very fabric of our National Unity, hereby calls on His Excellency, Ezenwo Nyesom Wike, to declare for the 2023 Presidential elections in order to salvage Nigeria as clearly demonstrated in his outing as Governor of Rivers State.

“Governor Wike is a nationalist who truly believes in the unity and indissolubility of Nigeria and has clearly demonstrated this in his uncompromising stance against seperatist agitations and his liberal posture as demonstrated during the sokoto fire inferno.

“The Cross River Renaissance movement further notes the ingenuity in social engineering exhibited by Governor Wike in handling the security situation in the Niger-Delta, which has brought about lasting peace in the region and considers this trait as a major panacea required in resolving the current security challenges plaguing the country.

“At a time where truth is lacking in our polity, at a time when the current failed APC government is intimidating every opposing voice in the country through the use of state machineries, HE Nyesom Wike has remained very bold and courageous in confrontating issues of National concerns and has proven to be psychologically, spiritually and politically stable to lead the country.

“He has remained a man of justice, equity and fair play, who fights for the weak, the poor, the voiceless and protects the interest of the youth and women.

“Nigeria is in dire need of a leader with the needed competence to drive a clear prosperity agenda for the people that is hinged on fiscal federalism and return the country to it’s days of lost glory.

“The Renaissance group is therefore extending its net of negotiation, and expresses the willingness to build bridges, leverage on the network of its members across all other zones in the country to achieve this lofty agenda.”