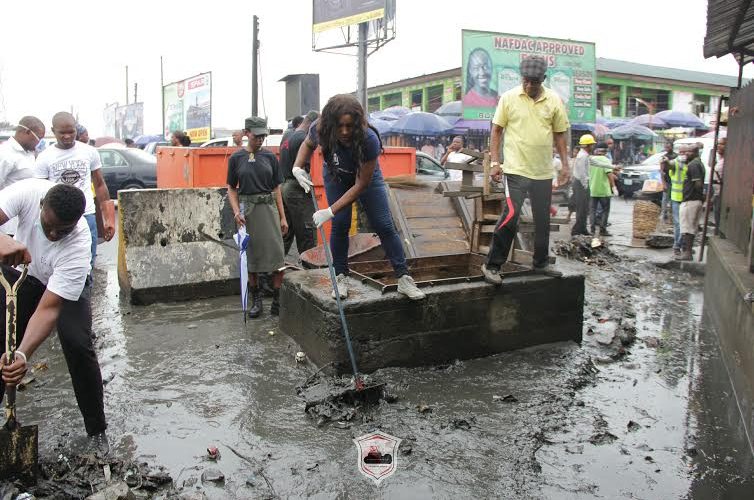 Not even the heavy rain could stop them.

Nearly one thousand people, including dignitaries, turned up for a cleaning exercise at the popular Watt market in Calabar last Thursday.

The cleaning exercise tagged, “Clean Calabar project” was organized by the Hit 95.9 FM Calabar as part of its corporate social responsibility aimed at restoring the state to its original status as the cleanest city in the country.

The exercise which kicked off at about 9:00 a.m., had in attendance the Commissioner for Environment, Mike Eraye; Director General of the state Primary Health Care Agency, Betta Edu; Chairman of Nigeria Union of Journalist in the state, Victor Odu; religious organisations; some private organisations and management and staff of the station, led by the Chief Executive Officer, Patrick Ugbe.

The dignitaries folded their sleeves and entered the ditch to ensure the dirt which had blocked the water ways were cleared. Those that littered the ever dirty Watt market and environs were also cleaned up and disposed-off.

Mike Eraye, the Commissioner for Environment in Cross River state, told reporters that the gesture of the management of Hit FM was worth emulating by other organizations doing business and making profit in the state, adding that government should not be depended upon for everything.

His words were also corroborated by the Director General of the State Primary Health Care Agency, Betta Edu who maintained that for cleanliness to be achieved, Cross Riverians must consciously take the cleanliness of their environment seriously.

The Chief Executive Officer of Hit 95.9 FM, Patrick Ugbe commended the people for the large turn-out.

Ugbe who has held different public offices in the state, including Chief Press Secretary to the Governor, Commissioner for Information, Commissioner for Youth and Sports under the Liyel Imoke administration called on responsible corporate organisations in the state to stop waiting for the government for everything.

He added that everyone must play his role for the betterment of the society.

Ugbe promised that the clean-up exercise would be made an annual event.

The station began commercial operation in February 2016, holding the city of Calabar, and indeed Cross River state, spellbound with its refreshing programming and clear signals.