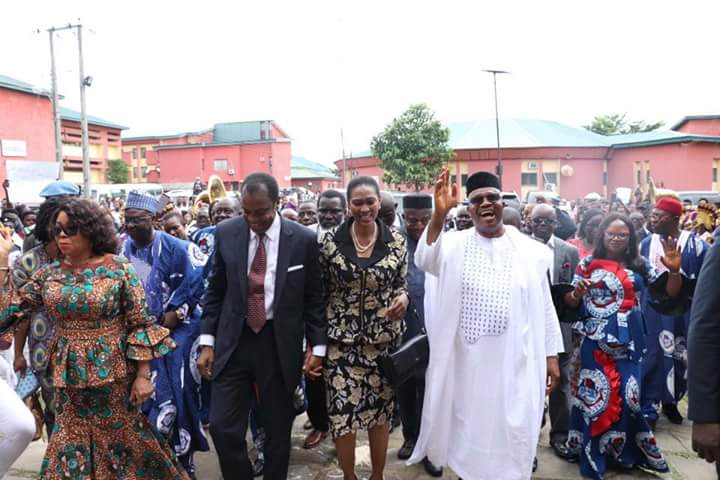 The minority leader of the Nigerian Senate, Senator Godswill Akpabio has said that residents of Akwa Ibom state were used to spending their weekends in Calabar, the Cross River State capital just to see the beautification of the city by former Governor Donald Duke.

Mr. Akpabio said all this had to stop when he became governor of that state in 2007.

He stated this on Friday in Calabar shortly after the convocation lecture presented by Mr. Duke at the University of Calabar.

“Before I became the Governor of Akwa Ibom State in 2007, we were among those who use to fill up Calabar for you.

“Then I was commissioner for 6 years. I want to confess that every weekend, in fact all my colleagues started their weekends from Thursday, we use to navigate towards calabar to see the wonders of Donald Duke.

“For years Akwa Ibom people were used to doing their marriages in Uyo, then they come to Eleven Eleven in Calabar to take wedding pictures.

“Your excellency, I want to apologize to you that when I became the governor, I stop my people from coming to calabar to take pictures,” Akpabio said.

Mr. Duke had presented a lecture on tourism in national development.

And, Akpabio who also presented a plaque to Mr. Duke also told him; “you caught my attention, I listened with apt attention to you from beginning to the end. And I can tell you just as the feelings of all of us in this hall, you have not disappointed us.

“There is no doubt that the topic was well chosen, and the lecturer, a square peg in a square hole.”

Earlier, Mr. Akpabio accompanied by his wife had commissioned the new faculty of Engineering block named after him.