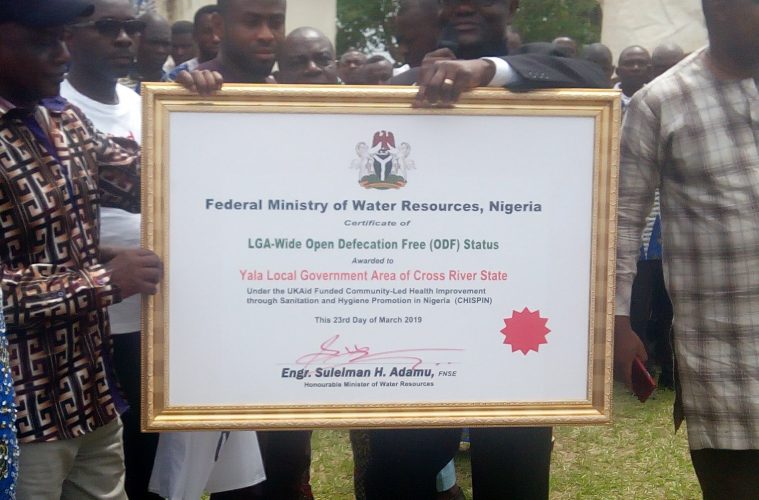 Presentation of certificate to Yala LGA

Following the launching and ongoing execution of the Community Led Health Improvement through Sanitation and Hygiene Promotion in Nigeria (CHISHPIN), Ikom and Yala Local Government Areas of Cross River State have, on Friday the 22nd and Saturday the 23rd of March, been respectively certified Open Defecation Free (ODF).

The success of the Rural Sanitation and Hygiene Promotion in Nigeria (RUSHPIN) programme which produced Obanliku as the first ODF LGA in Nigeria, gave birth to the Community-Led Health Improvement through Sanitation and Hygiene Promotion in Nigeria (CHISHPIN) project, a 1.5 million pound project, which is funded by the UK Government’s Department of International Development (DFID) under the UK Aid Direct Impact Window with United Purpose as grant holder and implementing agency.

The CHISHPIN project has so far been implemented in Biase, Ikom and Yala LGA’s with United Purpose working hand in hand with the Water, Sanitation and Hygiene (WASH) units of these LGA’s to achieve great results.

Speaking at the celebration event for the achievement of an ODF status at Ikom on Friday, the Federal Minister of Water Resources, Engr. Suleiman H. Adamu represented by a director in the Ministry, Emmanuel Eze, commended the implementing agency, United purpose as well as the donors to the project and the members of the community for all their contributions to the work.

Also speaking at the event, the Programmes Manager for United Purpose, Nanpet Chuktu, urged the Cross River State Government to increase the investment in sanitation and take ending open defecation as the next challenge to focus on.