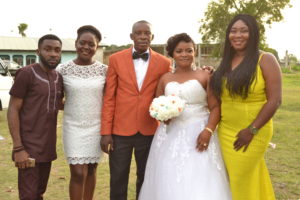 IMA IMA & DANIEL LOVE STORY! THEY MET ON A RADIO SHOW NOW THEY ARE MARRIED

It seems like fiction, by the means this couple met, but fairy tales do come true.

Ima Ima and Daniel (Now Mr. and Mrs. Davies) have brought to life the saying ‘love comes from unexpected places’, as the couple met on radio! You read right – they met on a radio program “The Late Night Sail” on Hit 95.9 FM, the premiere urban contemporary radio station in Cross River State.

The program, hosted by Ralph “Fresh R” Udofa, was created to deal with love, relationship issues and also hook up single folks. How unlikely is it that you’d meet the love of your life on a programme designed for night crawlers? Ima-Ima certainly wasn’t expecting love but you know what they say about destiny.

An ardent follower of the show, Ima-Ima was hooked up with Daniel (also an ardent follower) while going through an emotional rough patch. At first, they were just two people, then one thing led to another and she was saying ‘YES!’ to his proposal. The duo became one on Sunday 13th May, 2018 at the Apostolic Church, Ikot Effanga, Calabar, Cross River State.

Ima-Ima couldn’t hide her joy when she openly told Davies that she’s “so happy to spend the rest of her life” with him. Davies, on the other hand, thanked Hit 95.9 FM for giving him the love of his life.

Hit 95.9FM has once again, proven itself to be the radio you can feel and touch. Since its establishment in 2016, the station has warmed its way into the hearts of millions of listeners by providing the “Best Music, Best Talk” on radio in Cross River State and other parts of Southern Nigeria.

Among many other achievements, Hit FM is the first radio station ever to set the Guiness World Record for the longest club party ever and the undisputed No. 1 station in Calabar and Cross River State.

The Management and Staff of Hit 95.9 FM, Calabar wish the couple lots of joy and happiness together

Check out pictures below; Couple and On Air Personalities of Hit 95.9 FM.