Imoke in the Eyes of the People 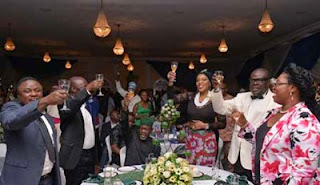 Those visiting Cross River State and the residents of the state are enamoured with the state governor, Liyel Imoke, for his accomplishments and leadership style.

Hopewell Ukpebor writes There is something about the governor of Cross River State, Liyel Imoke, that endeared him to the people he governs: It is his penchant for good work and dexterity to be focused in the face of distractions.

On a recent Wednesday, it was no other connoisseur and highly influential native of the state, than Senator Florence Ita-Giwa who beat the drum for Imoke to dance to, based on his accomplishments in the state more than seven years ago.

In a night, where prominent indigenes of the state were recognised for their excellent work in different areas of life, Ita-Giwa – whose good height positioned her with the opportunity to survey her environment with ease—looked round the banquet hall, where the event was taken place and said, “this quiet performing governor of River State deserves all the accolades.”To be sure, Ita-Giwa told her audience to join hands with Imoke to find a better successor that will sustain his good works over the years. After reeling out the governor’s good deeds in the state in the last seven years, she asked the awardees and their well-wishers to watch a presentation she titled, ‘steering the peoples mandate.’

It was a showpiece of Imoke’s excellent performance.She said: “All those aspiring to be the governor of Cross River State must watch this presentation. I must say that despite the million challenges faced by this state; financial, loss of landmass, loss of natural deposits and others, Cross River State has remained number one in development, hospitality and in other areas.

There is no one state in this country that has enjoyed the influx of international investors like Cross River State. I would love to give cheers to this quiet performing governor, his deputy and all his team.”True, in recent times, the buzz of activities in Cross River State has forced major local airlines to increase their flight operation to Calabar, the state capital

.The spokesperson for Arik Air, one of Nigeria’s leading airlines, Mr. Banji Ola, said his airline has recently increased its trip to Calabar from one flight daily to two, “due to demand and the need to give passengers a choice.” Thus, confirming the words of Ita-Giwa about Cross River State being a delight to visit by many people, following the giant strides of Liyel Imoke.But Ita-Giwa’s recent tributes to Imoke transcends the governor’s act of good governance, his support base for elders in the state was one of the reasons Ita-Giwa blew his trumpet.For instance, in Cross River State, the elders are accorded the rights of a sage.

It was Imoke’s administration who introduced elders committee alongside the existing elders’ caucus in all the local government areas of the state to give them a voice in governance and in particular to tap into their wisdom in administering the state. And it is paying off.

Last week when THISDAY visited Cross River State to observe the progress being made, it was clear that Ita-Giwa and others were not just praising Imoke for nothing, the huge construction work going on at the Summit Hill, a part of Calabar metropolis where a new city is springing up is a testament to that fact.

At the Summit Hills, the progress of work will stun those have seen the place when the ground breaking of the soil was done.  Although still in construction phase, the project is expected to be comparable in size to the Canary Wharf Business District in London, United Kingdom or the Lower Manhattan district in New York City, United States. The site which includes a nature reserve for endangered species of monkeys native to Cross River State along with nature trails has a golf course that is captivating with its wide area.The Calabar International Convention Centre (CICC) within the neighbourhood has become the cynosure of all eyes with recent removal of heavy propping system used to support the building.
One of the experts responsible for making this architectural history in Nigeria was Vincent Legros, Senior Methods Engineer of Bouygues Construction, who came from France to ensure the propping work was done properly.After eight years of working on projects in South Africa, Qatar, China, USA, France and the UK, Legros said he is yet to see anything like the CICC, describing it as a spectacular and technically challenging building. “I hope this building will be deeply appreciated because nothing around will match this edifice.

It is like a diamond in the forest, unique and very precious.”Now, finishing work on the building has commenced with floors and rendering of walls. Expectedly, the work on monorail that will link Summit Hills to Tinapa just adjacent it has moved rapidly with workers working 24 hours to deliver a masterpiece.The contractor handling the Calabar monorail project has promised to deliver it on schedule and according to specifications.The Managing Director of Ponet, Mr. Hans Butcher, said work was progressing at predetermined pace.
He stated that that the challenges of time and poor weather conditions as well as other elements would not affect the timely completion of the project as envisaged.According to Hans, “the monorail, an electric powered passenger shuttle train comprising 10 passenger-cars and two equipment cars (total of 12 cars per train) and a 78 total seating capacity will soon be available at the Summit Hills to carter for the transportation needs of residents and visitors.”He stressed that coaches and other vital components had been manufactured and ready for shipment from various parts of Europe.

He also hinted that “the elevated monorail transport system is uniquely and beautifully designed to suit the eco system of Summit Hills as well as connect it with TINAPA Business and Leisurr Resort without compromising global standards in line with the state’s disposition on tourism development.”And for Imoke, it’s a dream come through. “My vision to integrate TINAPA Business Resort which is about 12 kilometres away from Calabar via a monorail with the Convention Centre, both of which are separated by an artificial lake is progressively being realised.

The monorail will provide a wonderful opportunity for guests at the Tinapa Hotel and Tinapa Knowledge City to utilise conferencing facilities across the lake. All the offshore components  of the project had been fully paid for and awaiting shipment into the country,” Imoke said during his recent visit to the site to monitor the progress of work .

The scale and flexibility of the venue offered the freedom to design an event that would impress the audience and enhance the stature of the client.Much more, Imoke’s rural and urban connection in the creation of link road has helped changed lives for the people.

The Calabar International bypass, an elevated 6.5 kilometre road runs through Calabar Municipality today as a new development frontier zooming across a swamp land. The bypass that is connected to Calabar-Ikom Highway to ease the gridlock in the city centre has indeed become the cynosure of all eyes. Its ambitious nature means there is no limit to the expansion of this Cross River State capital.To be sure, motorists are amazed nowadays at the transformation of the mangroves that over the years had been a dreaded area.

So a once dreaded area has been transformed into a beautiful layout ready for further development into the bank of the Atimbo River.And just like Calabar, Ugep, Ikom, Ogoja, Obudu and may other part of the state are not left out. Clearly, the urban renewal programme of the state has opened it up in line with its tourism drive. Yes, rural transformation reigns in local government areas and several communities.

In the development annals of Cross River State, provision of infrastructure is key and a yardstick for assessing the government of the day. The reasons are obvious, the state has been backward in all indices of development before now. Thus, that Cross River State has become a huge construction site with creation of access roads in the rural areas and construction of housing units explained the progress made in the last eight years.Since 1999, Cross River has witnessed a shift in its development paradigm.

Tourism has made the state to become a dot on the map while agriculture has brought about increase in food production and creation of job opportunities for the people.Governor Liyel Imoke succeeded Donald Duke in 2007 and the exchange of leadership baton did not alter the development agenda of the state as it rather solidified the foundation laid.

Imoke brought innovation to the blueprint as he added rural transformation to it. Thus today, over 474 rural roads have been constructed under the African Development Bank Rural Access Mobility Project (ADB-RAMP).And to confirm Ita-Giwa’s words, in the last three years, the government of Imoke despite the lean resources of the state has embarked on many projects that have changed the development landscape of the state.A visitor to the state at the weekend, Akin Adenuga who attended the Global Entrepreneurship Week at Transcorp Hotels in Calabar said, “I have been here before.

I knew what it was and I have been around the city for a closer observation, I can tell you a lot has changed. Cross River has got a good leadership, the reason for the progress in the state.”And one of the indigenes who were conferred with the state award during the last Independence Day celebration, Mr. Wilfred Innah, couldn’t hide his feelings about Imoke’s love for others and his sense of duty.
“This is a state where merit is recognised. We feel exceedingly humbled that the efforts we are making quietly and privately were being watched by the public, particularly the people of Cross River State.”In June last year, a former speaker of the Akwa Ibom State House of Assembly looked at the array of Cross Riverians and how we were all conversing, where current ministers, past ministers, commissioners, old and young related well at a meeting and he remarked that ‘Cross River State is a special state, In my own state the old and the young don’t relate.’
“In the next nine months or so we shall have another government in the state and Senator Florence Ita-Giwa mentioned it. The documentary we watched is a good lesson to those who are aspiring to be the governor of this state.”Now, for a good successor, Imoke will definitely have that arduous task. But for a man whose praise is on the lips of his people, it may not be difficult to sustain his good works.