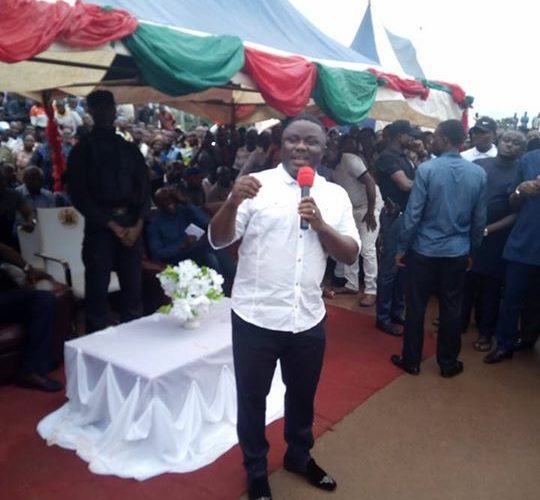 The road to 2019 and second tenure for the Obudu born young politician and orator/inspiratory, the Governor of Cross River State, Senator Professor Benedict Bengioushuye Ayade has increasingly become manifest
and self-evident as the people of Northern and Central Senatorial
Districts of the state stood still for him as he went on some projects site evaluation tour and first harvest from the Ayade Rice Farm under the Ayade Integrated Farm, on Friday, September 15, and Saturday 16,
2017.

Throng of supporters followed the governor and his convoy right from
the Ikom Bridge chanting various soul lifting and motivated political
songs to the site of the plant at Nkum Yala in Ikom where the building
of a gargantuan Cocoa processing Plant is ongoing and the project site
evaluation ceremony took place. At the site of ongoing construction of cocoa processing plant at Nkum,
Yala, Ikom, it was a convergent and melting pot for all classes of
individuals, Traditional rulers, youth and women groups, students’
group among other dressed in colourful attires chanting solidarity
songs indicating their express appreciation of the cocoa processing
plant and their overwhelming support for Governor Ayade to retain his
seat at the Cross river state government House as the state number one
citizen from 2019-2023. The siting of cocoa Processing plant in Ikom by the administration of
Senator Ayade fulfilling his campaign promise excites all cocoa
producing communities and local government areas of Ikom, Etung, Boki,
Obudu, Obanliku and others, who rightly view the cocoa plant as
deliberate plan by Governor Ayade to add value to the cocoa chain and
for farmers to reap maximally from the sweat of their labour.

They equally sees the ongoing building of the cocoa plant as a panacea
that will definitely put an end to the era of cocoa farmers and cocoa
bearing communities in Cross River State laboring for peanuts, while
cocoa merchants /traders are the ones who reaps hugely from the
proceed of their farms, while at the same time most of their produce
are taken and counted to the advantage of other; hence the
unprecedented crowd that welcome Ayade and expressed an unreserved
support for him to continue in office to 2023 is lucidly
understandable.

Traditional dance from Ikom, Etung and other cocoa bearing/producing
local Government Areas and communities in the state entertained at the ceremony.

After the conclusion of activities at Ikom and Nkum, Yala, Ikom Cocoa
Processing Plant, the convoy drove to Ogoja Ultra-Modern Rice
Processing Milling Plant, Ogoja where the old and the young and
supporters from the northern senatorial district defied the sun which
was occasionally humbled by the rains, whose season it actually is
from their various villages and communities across the five Local
Government Areas of the district, and had already converged in a
massive crowd at the rice mill site from morning waiting for their
beloved governor, brother and son of the soil, Senator Ben Ayade. It certainly would be an understatement to assert that the support and
expression of joy and happiness from the various women, youths,
students and the array of the traditional rulers who are the
custodians of our customs and traditions was massive and expressly
overwhelming, alluding to the reality that with the ultra-modern rice
mill fast becoming a reality, and fulfilling Ayade campaign promise to
the district, the loss glory of Ogoja rice taken to some other statesand given a different name will soon be a thing of the past, just as their financial position will be greatly transformed.

Traditional dances from the five Local Government Areas of the
district were not left out as they performed and entertained guests at
the occasion. The next day, Saturday, September 16, 2017, it was another visible
expression of approval for Ayade agricultural development projects and
programme and support from for his second term when the people of Bebi
and the surrounding communities of Obanliku turned out en-mass at the
Ayade Integrated Farms to receive the Governor and his entourage to
carry out the duty of carrying out the first rice harvest from the
Ayade farm whose current planting portion is 500 hectares of
cultivated land.

Youth and women groups, students and politicians and supporters of
Ayade, all chanted solidarity songs to welcome the governor and
expressed sincere wish that he stay for eight years to enable complete
the loadable projects and programmes of his administration.
Traditional rulers were not left out as they also dressed in their
complete royal regalia to welcome their son, Governor Ayade. On his way to Obudu from the farm, the Governor’s convoy stopped
severally along the road to inspect the progress of work on the
Obudu-Obanliku section of the ongoing construction of 134 kilometres
Mfom-Okpoma-Imaje-Bekwarra-Obudu-Obanliku dual carriage way and to
address crowd of people who waves unceasingly to him, chanting
solidarity songs from Obanliku to Obudu.

At Obudu the Governor and his convoy carried out on-the-spot
assessment, inspection and progress of work tour on the ongoing
construction and expansion of roads in Obudu Town, driving through the
Hospital road to the boundary with Benue state, reversed and drove
through Calabar road to the Obudu central park, venue for the
reception of the Governor by the people where the convoy found it
extremely difficult to move as a result of the mammoth and
unprecedented crowd of youths, children, men and women, students,
mothers and fathers as well as the presence of the custodians of our
customs and traditions, the royal fathers that took over the entire
area and the surrounding streets to express their unreserved support
for their son and brother, Governor Benedict Bengioushuye Ayade.

The innumerable horde of persons of all political, socio-economic and
religious background who converged at Obudu on Saturday, September 16,
2017 to receive the Governor and to sound in an unmistakable
unanimous voice that they are comfortable with the leadership and
developmental path which Ayade has charted for the state and would
massively support his second tenure exposed the false claimed by some
that governor Ayade is not welcome in his home town, Obudu, just as
the throng of persons would have rendered it impossible for a pack of
sand thrown up for a grain of the sand to able to hit the ground but
hit on human heads, thereby reducing to a child’s play the famous
Oshodi, Lagos overhead bridge crowd.

Along the way from Obudu to Bekwarra even at that late hours, the
expression of the crowd that waves to the convoy unceasingly as we
drove by, is a clear indication that Ayade is on track, has done well,
is currently doing well and shall continue to perform better, hence
the people would have no dispute as to whether or not the Obudu born
politician should take his second tenure and complete eight years in
office other two governors before him from 1999-2015 enjoyed’ indeed,
Ayade case should not be an exception!

Indeed, Friday September 15 and Saturday September 16, 2017 remain
memorable and indelible in the political history of senator Ayade as
the governor of Cross River state, especially as he forges ahead to
secure a second term in office come 2019 by the grace of God. It is so
because just in these two days, the people proved that they are all
behind Ayade and that were so pleased with the progress he is making
in his quest to develop the state and take away from dependent on
federation account that is dwindling by the day and turn attention to
our traditional means of survival, the agricultural sector.