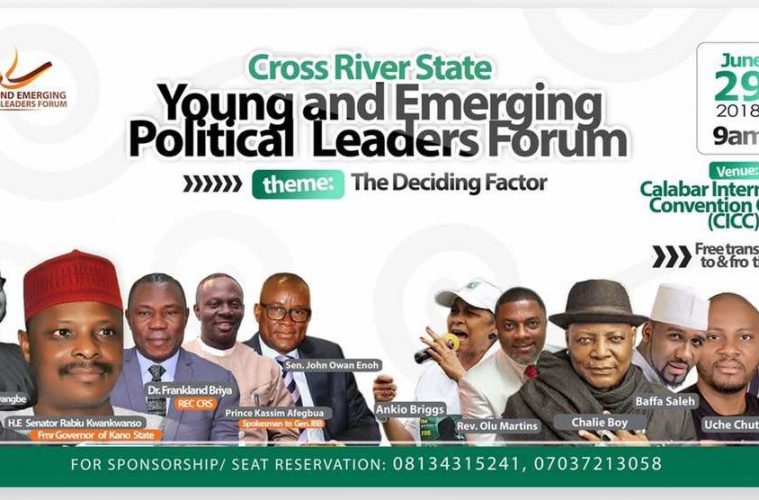 The stage is finally set for the 2nd edition of The Cross River State Young And Emerging Political Leaders Forum (CRYEPL), the largest convergence of young people in Cross River State with a view to chat a new course in politics for themselves, the state and the Nation.

The conference is expected to take place for the first time at the Calabar International Convention Centre (CICC), located at Summit Hills, Calabar on the 29th June, 2018 by 9am.

The maiden edition of the summit which held in November, 2017 at the Pearl Ball Hall of Transcorp Hotels, Calabar had the Senator representing Central Senatorial District of Cross River State; Senator John Owan-Enoh speak on ‘Political Leadership, A Call To Serve.’

Theme for this year’s event is tagged: ‘The Deciding Factor,’ and will focus on “Political Development; Governance And Clamour Of Youths In Politics.”

Over 2000 participants across the state will gather for the Summit. Youths, employed and unemployed, technocrats, entrepreneurs, innovators, policy makers, government functionaries as well as the media, will meet at the one-day event which is aimed at inspiring positive actions and promoting existing political orientation of young and emerging politicians in the state and Nigeria’. This year’s event will also feature as one of its activities, presentation of The Mary Slessor Award for Excellence to young Cross Riverians who are using their skills and abilities for the development of the state and the Nation. Free transportation to and fro the venue.

CalabarBlog.Com is a proud media partner