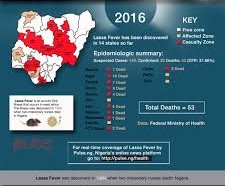 The University of Calabar Teaching Hospital (UCTH) on Thursday urged residents of Cross River not to panic as the hospital was prepared to contain any possible case of Lassa fever. Dr Obaji Akpet, Head of Department, UCTH Community Medicine, said this at a one-day seminar to sensitise health workers on prevention and control of Lassa fever.

Akpet said there was no cause for alarm as UCTH had received Ribavirin, the anti-viral drug for Lassa fever in preparation for any suspected case.

“In nine weeks, 212 suspected cases have been reported with 72 deaths already in the country. But there is no need for panic as the hospital has received enough Ribavirin from the Federal Government in preparation for any possible case,’’ he said.

Earlier, Dr Thomas Agan, the UCTH Chief Medical Director (CMD), said the hospital management was being proactive by organising the workshop to train health workers on standard ways of controlling the outbreak of Lassa fever. Agan said, with reports of Lassa fever in neighbouring states, it was best for health workers in the state to know exactly what to do in case of any suspected case.

He said: “Today we are here because the world’s eyes are on us, as at today we have 17 states that have been reported to have this deadly disease. Although the disease is not new, it has never spread like it is spreading this year. Maybe it is because we have not been careful enough.
Today, we have brought trained eminent speakers to tell us exactly what we need to do to prevent as well as control the spread of the virus.’’

The CMD advised that to control the spread of the disease in the country, private hospitals should stop referring suspected cases to teaching hospitals.

According to him, suspected patients should be quarantined, while other hospitals should be alerted to assist with preventing patients from having contacts with too many people.

One of the speakers, Prof. Angela Oyo-Ita, in her lecture titled  “Emergency Response Approach’’, said it was everybody’s responsibility to control the spread of the disease, not just health workers alone.

“Just like in the case of Ebola, Lassa fever must go but stopping Lassa fever is everybody’s business. Take the steps to protect yourself, your family and the society at large,’’ Oyo-Ita said.