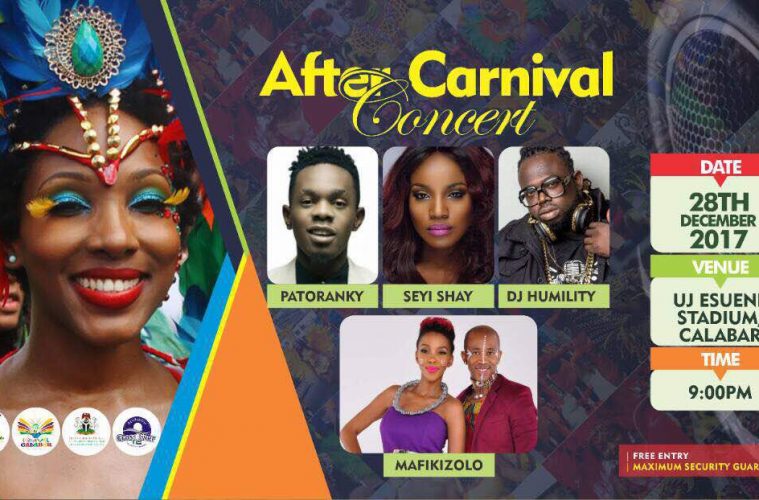 A South African Hip Hop artist, Mafikizolo, is among the 30 artists expected  to headline this year’s “Carnival Calabar and festivals.”

Special Adviser to the Cross River State governor on Events Management, Mr. Ken Aklah, disclosed this to newsmen, Wednesday, at the Ernest Etim Bassey Press Centre, Calabar, while unveiling the timetable for the event.

Accompanied at the briefing by the Commissioners for Information as well as Tourism, the Chairman and MD of the state Carnival Commission, Aklah listed other artists expected at the event to include David, Flavor,  Patoranking, Runtown, Timaya, Venessa Mdee of Tanzania, Neza of Rwanda, Inyanya, Style Plus, MC Galaxy, Naeto C, DJ Humility, Tekno and DJ Jimmy Jait, among others. According to Aklah, “despite the difficult times, the Prof Ben Ayade’s administration in the state will continue to ensure that this noble venture that has brought Cross River to global prominence is not truncated,” adding that “it was to this end that December salaries were paid in November, pot holes are currently being filled in the three senatorial districts of the state with improved electricity supply.” He also  intimated that about 25 countries were being expected, even as government has introduced new offerings into the event as a deliberate measure to boost the excitement for visitors and others who will be in Calabar for the globally recognised event.

On security, Aklah explained that operational vehicles have been handed over to the various security agencies in the state and are already stationed at strategic positions, adding that, “a security camp has also been established and furnished at the Christmas village.” He disclosed that the last dry run before the Carnival proper will hold on December 17.

This he pointed out “will be flagged off by the Minister of Information, Alhaji Lai Mohammed, to ensure that Cross River remains relevant as the flagship of tourism.”

Other additions into the Carnival, Aklah disclosed, is the introduction of Power Week which starts from December 26 with cultural carnival where 22 states and the 18 local government areas in the state will be participating.

Bikers parade and Miss Africa beauty pageant will take place on December 27, while 28 is the actual carnival and 29 will see viewers watching another newly introduced package tagged, “wonders on wheel for vintage cars and convertibles.”

International Carnival is slated for the night of December 29, green carnival and street party will hold on December 30 while the fireworks to herald the new year will hold on 31.

In their various remarks, Commissioners for Information and Orientation as well as Tourism, Rosemary Archibong and Eric Anderson respectively, averred that the introduction of more packages into the event was to truly make it bigger, better and bolder, adding that, it will create an avenue for multiplying effect in the society.