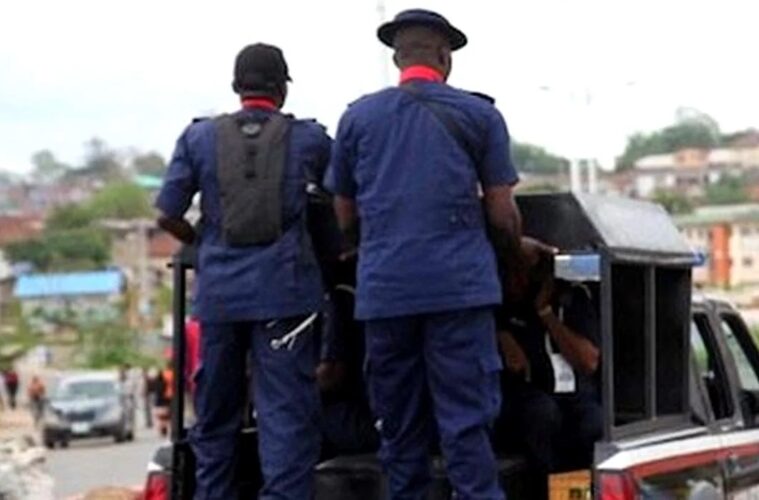 Man Shot for Urinating Near NSCDC in Calabar

An unidentified personnel of the Nigeria Security and Civil Defence Corps NSCDC,has shot a middle aged man for urinating opposite the State Command office in Calabar, Cross River State capital.

Vanguard learned that the Labourer simply identified as Nwa Aba, aged 32, who was later rushed to the hospital was shot at about 5:00am on Wednesday while urinating 50 meters away from the NSCDC Command headquarters in Calabar.

An eyewitnesses who pleaded anonymity told Vanguard that the victim was shot twice on his waist while facing a shanty built about 50 metres away from  the NSCDC office at No. 2 Harbour Road, Calabar Municipal Local Government Area.

“Nwa Aba was urinating at this place (pointing to the spot he was shot) when the Civil Defence officer shot him on his waist. He is a Labourer in the Petroleum Tanker Driver’s Park. He has been rushed to the hospital and we don’t know his condition for now”, the eyewitness said.

Another eyewitness ,Mr Bright Uzo vowed   to petition the NSCDC for the crime ,adding that no matter what the unidentified personnel must have noticed he should have shot “Nwa ABA”

“How can an official mandated to protect the civil society shoot a man just for urinating? Even if it is at their gate, he ought not to shoot him. He is not a criminal, he is just answering to nature call .

“Meanwhile, the place ( where the victim urinated )is far off from  the NSCDC gate. As I am talking to you right now, I am going to petition the them for this act. It is not fair, this a Democratic country,we are not in a Banana republic “, he said.

Vanguard also learned that the shooting of Nwa Aba sparked up a protest in the early morning hours as group of youths demanded justice for the victim.

The protesters were however dispersed by armed personnel of the  NSCDC as they shot in the air to disperse the crowd .

When contacted on the telephone on Wednesday, NSCDC Spokesperson in Cross River State,Solomon John told Vanguard  that there was an  investigation ongoing and that the victim was in stable condition  and doing fine.

“Actually, we came in this morning (Wednesday) to discover what happened because it happened in the early hours and only officers were on night duty.

” For now, I can’t ascertain what happened because I have not been briefed about  the matter but I can tell you that there is an ongoing  investigation.

“We are trying to unravel what happened but for now, the matter has been settled and the guy (Nwa Aba) is okay ,nothing is wrong with him”, he said.