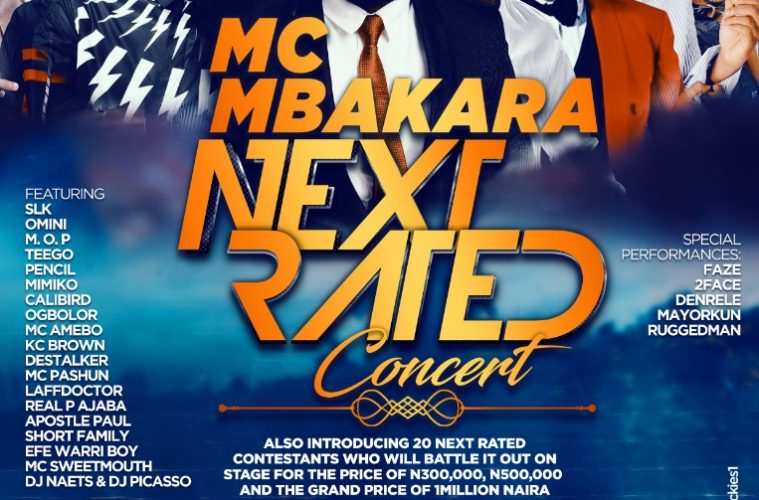 MC MBAKARA TAKES OVER LAGOS WITH ‘NEXT RATED CONCERT’, 2FACE, FAZE, MAYORKUN AND OTHERS CONFIRMED

The MUSON Centre Lagos will on May 26, 2019 play host to an array of entertainers to stage a mind blowing concert, poised to stake their claim to fame and stardom in the multi-billion Naira entertainment industry.

The convener, Cross River born comedian and Master of Ceremony, MC Mbakara refers to the concert to be a showcase of talents to watch out for in Nigeria’s entertainment industry, an initiative which inspired the theme of his second concert in Africa’s entertainment capital.

In a chat with him in Lagos, he said asides the parade of A – List performing acts, 20 next rated talents will also grab a chance to stardom and win millions in prize money.

Mbakara, who just graduated from the Emem Isong movie academy hinted that he is delving into movies, he said he will stop at nothing to ensure that he uses his capacity, resources and connections to create a platform for the next generation of talents in entertainment to be discovered and promoted. This he hopes to achieve through collaborations with industry stakeholders and committed partners.

The ‘Next Rated Concert’ is packaged by Lanre Makun and enjoys sponsorship from Zenith Courier company.