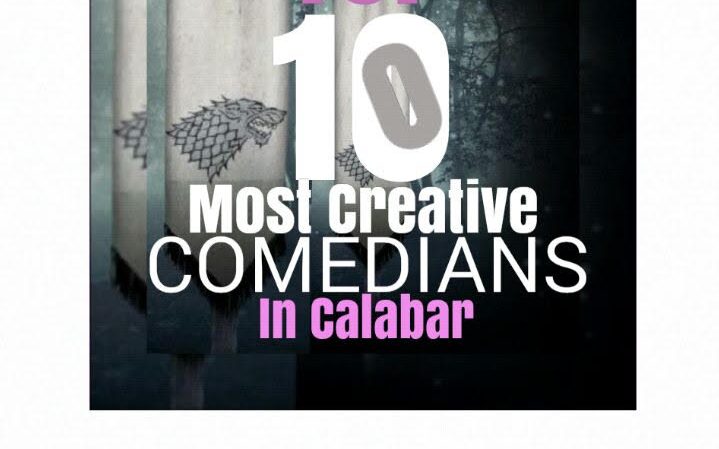 MEET THE TOP 10 MOST CREATIVE COMEDIANS IN CALABAR

The entertainment terrain has evolved creative personalities with awe-inspiring and multi-faceted talents, drawing a huge chunk of effective investors in its content-driven economy and posing a cynosure as compared to other sectors.

According to HelynIkem, ‘Comedians are your psychological and stress-relieving specialist’. Factual to this claim, the city of Calabar houses a variety of these mind-blowing psycho-medical humour merchants, comic pharmacists and stress-extracting experts.

Calabar Blog presents to you her first ever celebrity chart series: TOP 10 MOST CREATIVE COMEDIANS IN CALABAR

After a structural analysis, constructive criticism and critical elucidation by a team of renowned entertainment experts and analysts; this list was duly drafted, actively analyzed on the premise of all-round creativity, consistency, social presence, freshness in jokes content, shows organized, general impact in the industry and society among others.

Calabar…! Meet your comic chart toppers at the moment… Wondering why HOD was ascribed ‘A walking joke?’ Because, his social personality spells his hilarious representation. Getting a prominent footage through “Locuzade Boost freestyle” debut edition, this creative dude has never rested in his oars while providing content in the comedy business.

A social analyst, MC, comic practitioner, civil engineer, media personnel and a youth activist through his art. This cool dude has a unique brand over others. Anticipating his creative nature at every show, because this comedy Head of Department will surely dislocate your ribs, if you allow him. With a peculiar personality of switching tongues to diverse ethnic groups in Nigeria and beyond, Prof. Aboki[wazobia] knows the perfect joke for every situation; be it political, social, educational and religious.

Presenting Calabar’s most comic radio show in CRBC radio: ‘Afternoon Ghen-Ghen’; this OAP, MC, football analyst and TV host, has creatively created an impact in the comedy sub-sector of Cross River State. This professor of comicology has diverse rib-cracking techniques to spill-out; fingers crossed as he frequently unleash his art. Standing at the front-burner of contemporary stand-up comedy in Calabar, Whokes is factually an awesome comic MC in all facets. Dating back through his campus storms in UNICAL and CRUTECH to his present day’s big-stage rock, his art had stood great as ever.

An event host, creative MC, concept-filled fashionista and a vibrant stage flame. Whokes is just the rainbow in every event. This guy’s stage thrilling mechanism and pattern is somewhat hilarious, that you just burst-out laughing at every word from his mouth. Starting strong with a gospel ideology to stand-up comedy back then, Elder Josiah remains that perfect gentle man with a comic remedy to every traumatic case in the church, hospitals, streets and even among his colleagues. His sense of humour is definitely ‘off-da-hook’.

A personified comedian, MC, OAP, event manager and a brilliant social analyst. This hilarious elder has a joke that is always beyond your problem, so you must burst-out laughing. He’s been here doing comedy with a passion and has perfected in the art. “MC Koboko? That guy can wow an audience in just two [2] seconds!” Joseph Phile exclaimed with confidence when asked about this comedian’s creativeness.

He co-anchors one of Calabar’s hilarious pidgin-belt radio show on CRBC: ‘Afternoon Ghen-Ghen’, which duly unveils his consistent nature in this vocational profession.

An MC per-excellence, music video wolf [not vixen oo!] and a true rib-cracker. This guy is evidently the next big thing in Nigeria’s comedy strata, through the un-wavering creativity he injects into every second he’s on stage. Robert Ekpo is an OAP, cooperate MC and an academic comedian. A graduate of Radiography from the University of Calabar, He got heads wagging on ‘Why he choose comedy’? But the fact remains that, Roby’s creative and outstanding skills has kept him in the A-list of comedians in Calabar.

From reality stand-up comic setting, through CRBC radio to Hit FM radio on the ‘FUNKY FREAKY FRIDAY’, this great mind is indeed hardworking and consistent with his popular comedy skits and show ‘ROBY EKPO UNLEASHED, which we are already anticipating its 3rd season. This grandson of the famous Margaret Ekpo is also a social media sweet heart through his creative posts and love for fashion.

He’s a comic merchant always on the go. Clearly, we haven’t seen the best of Roby Ekpo, as he keeps surprising us with his outstanding achievements. We all love surprises, and that has always been his selling point… feeding us with more of his excellent skills. Her big break came via her social media. She became famous on Instagram for her creativity and hilarious skits, she showcased her mind-expressive skills in acting and mimicking. Wofai’s active online crowd is indeed a plus.

Amidst her social media prowess, she had barged herself major jobs with EbonyLife TV as a host/presenter on EL Rated, Fidelity, Fashion houses, Clothing lines…etc.

There’s more to this talented lady than what you’ve been experiencing, she’s cooking up something comic-crazy that will make Calabar stand up as Nigeria’s comedy centre of attraction. Capturing the hearts of comedy patronizers in Calabar and beyond with his therapeutic use of hilarious words, this graduate of Political Science from the University of Calabar is the perfect MC and event host for your social gathering; especially if you want your audience laughing out their hearts.

Popular for his comedy skits which definitely unveils his creative nature, MC George is a multi-faceted individual who is earnestly harnessing his potentials to the benefit of Cross Riverians.

Wondering why he is tagged, Calabar’s comedy king kong? Well, his comic lines are original, unadulterated and heavy in content. He has been placing Calabar on the comedy map, making us proud. With an awe-inspiring popularity in Calabar, this standup comedian and cooperate MC at top-notch social events has carved a niche for himself in his unique pidgin-fusion as Calabar’s top radio comic OAP. His show on Hit FM Calabar, OTWE-TWE (Though initially with CRBC radio) is currently the most tuned in radio show in Cross River State and wherever the frequency signal can penetrate.

Mr. Awade, popularly known as Last Prophet (The Otwe-twe master), has impacted much in the lives of residence and listeners through his job creation summit, with a job listing website to curb unemployment in the state.

Though his name starts with ‘Last’, the otwe-twe master ”no dey carry last” as he is top of his game, especially with his recently concluded MY KINGDOM COME. Last prophet has inspired young talents in the entertainment sphere. He has been here for a long time and still is. Labouring his way to the top of comedy business in Calabar, this cooperate MC and comedian has always been a headliner for top comedy shows, political and social events across board. Though inscripted with the name: ‘Mbakara’ (Translated from the Efik language to be ‘Oyibo’ in pidgin), this humour entrepreneur has the magic touch. Mbakara’s 50mins ‘Calabar laff Mattaz’ was a huge success, and his recently concluded DOUBLE IMPACT SHOW featuring his wife Raju, became a town-trend. Dishing out spicy delicacies from his comedy kitchen, you can call him calabar’s humour chef who knows what recipe to use, when and how.

He has proven himself to be one of those that have come to stay in the comedy enterprise, in a more creative manner.

Did we wow your expectation? Is your favourite CREATIVE COMEDIAN not occupying the desired position you expected? Let’s get your view…