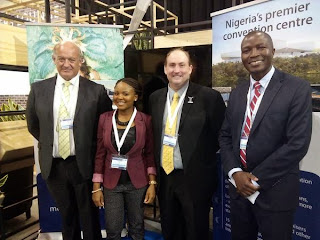 Set to open in the second quarter of 2015, the Calabar International Convention Centre [Calabar ICC] is not only the first dedicated convention centre in Nigeria but also the only new conference centre in Africa opening this year. Even more exciting is the fact that international events are already booked and well known and an experienced management team is in place.

Calabar ICC is located in Calabar, Cross River state – arguably Nigeria’s cleanest and safest state. The convention centre will host a wide array of events for national and global audiences comprising businesses , government and associations. Designed by the award-winning Danish firm, Henning Larsen Architects, the scale and flexibility of this convention centre truly sets it apart. The centre is able to accommodate up to 5,000 delegates in 18 different venues with as many as 2,200 for plenary sessions and as few as 2 in a small meeting room.

Practically all meeting rooms can be used individually or in combination – separated by soundproof partitioning walls. Indeed, the Calabar ICC is opening a new frontier for Africa and offering meeting organisers a new venue/destination option on the continent. This is especially true for the West Africa sub region which, until now, has been virgin terrain for business tourism.

Nigeria’s entrance, with the Calabar ICC, into the international meetings industry is significant, not only because of the country’s large population, but also for its projected continuous economic growth. With a GDP of US$510 billion and a population of over 170 million people, 40 million of whom are middle income earners, Nigeria is surely a viable place to do business.

The country’s large and expanding middle class might be due to Nigeria’s generous distribution of professional associations, whose conferences cover a variety of industries. Africa’s eligibility to bid for, and successfully host, such events is a critical ingredient in maximising this vibrant element of the meetings industry. Interestingly, Nigeria epitomises an almost bipolar view of Africa. While it is an exciting, dynamic, high-octane growth market for investors already doing business here, for others on the outside looking in, it appears chaotic, unstable, and uncertain.

However the unrest, instability and uncertainty is, in the main, confined to the northern regions while Calabar is located in the far south of Nigeria.Cross River State government’s support for business tourism is deserving of applause. Not only was the construction of the Calabar ICC awarded to a world-renowned firm, infrastructural development to complement the centre is also progressing at top speed. The government appointed an equally-competent international company, Alliance Venue and Facility Management [AVFM], of South Africa, as operating company of the Calabar ICC.

The Calabar ICC is part of the remarkable 367 hectare Summit Hills mixed-use development, which includes a planned business hotel, an international hospital, an 18-hole golf course and a residential development. One of the most exciting projects in Summit Hills is the monorail which will convey passengers between the Calabar ICC and Tinapa Business & Leisure Resort, both of which are landmark tourism developments in West Africa. This train will make it convenient for delegates and organisers staying at the Tinapa Lakeside Hotel (located across the lake from the Calabar ICC) to attend conferences at the centre in style and with ease.

For Calabar, an already vibrant and top destination in Nigeria, the Calabar ICC is a most needed addition to solidify its place as the preferred business tourism destination in the sub-region and the whole of Africa.

The city is already famous for its hospitality, experienced by the thousands of tourists from all over the continent who attend the annual Festival and Carnival. Carnival Calabar, the city’s most famous annual event can only be rivalled by the Rio de Janeiro Carnival. Calabar’s rich cultural heritage, intriguing history, superior sports venues and idyllic tourist destinations offer delegates a variety of unforgettable experiences pre- or post-conference.