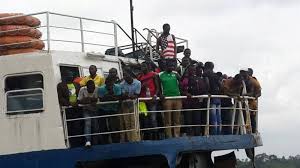 NAVY INTERCEPTS VESSEL WITH MIGRANTS FROM GABON IN CALABAR

The Nigerian Navy on patrol in Calabar waters has intercepted a vessel from Gabon carrying about 300 passengers, adding that half of them do not have valid travelling documents.

Briefing reporters at the shoreline of the Calabar waters, Flag Officer Commanding (FOC) Eastern Naval Command, Rear Admiral Atiku Abdukadir, disclosed that Nigerians, as well as foreigners from West African Countries, Central African region, and about 100 children were also on board in the vessel.

According to the FOC, the passengers with valid documents, after been checked by relevant agencies, will be cleared while more than half the number without valid documents will be repatriated back to Gabon.

While speaking, the Comptroller of the Cross River State Immigration, Funke Adeuyi, advised that parents should strongly discourage their children from travelling abroad without necessary documents.

According to the Cross River State government, intended investors and residents in the state have no course for alarm following this continuous immigrants through the Calabar waters, as the state government remains committed towards security of lives and property.

On December 26, 2015, the Calabar waters took delivery of about 700 deportees from Gabon which was supposed to be the last, following the Federal Government’s directive of putting a stop to such illegalities on its waterways.