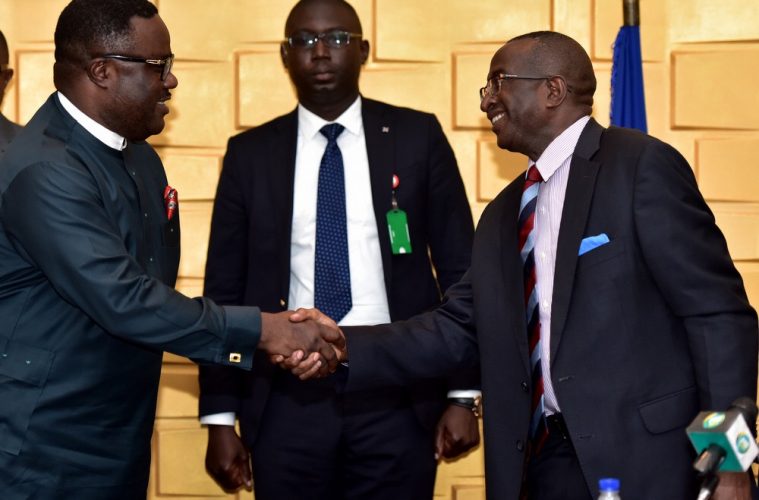 NDDC SHOULD COLLABORATE WITH STATES, NOT COMPETE – GOV. AYADE

The Cross River State Governor, Professor Ben Ayade, has stressed the importance of collaboration between the Niger Delta Development Commission, NDDC, and the different levels of government in the development of the Niger Delta region.

Governor Ayade spoke when members of the Board and Management of NDDC paid him a courtesy visit at the Government House in Calabar on Thursday.

Governor Ayade declared: “We are not competitors. We are partners in progress and as such, all the states in the Niger Delta and the NDDC must work in harmony. It is always better to sit down and share thoughts.” He lauded President Muhammadu Buhari for appointing Senator Ndoma-Egba and Mr Ekere as the Chairman and Managing Director of NDDC respectively, describing them as astute administrators that belong among the finest in the region.

The Governor appealed to the NDDC to support the state government in the development of signature projects in the state. He specifically called for collaboration in the state’s super highway and the Bakassi deep sea port.

Earlier, the Chairman of the NDDC board, Senator Ndoma-Egba told the governor that the Commission was working with a new attitude of cooperation and collaboration. He pleaded that the NDDC should not be judged by its actions in the past. Chairman of the NDDC board, Senator Ndoma-Egba

Senator Ndoma-Egba said that the Commission had invited the Presidency to re-activate the Advisory Committee as well the Project Monitoring Committee of the Commission to ensure that all stakeholders work in harmony.

He stated that one of the first decisions taken by the board was the re-activation of all dormant organs of the Commission, noting that the Advisory Committee was made up of all the governors of the NDDC member states and two other members appointed by Mr. President.

Senator Ndoma-Egba noted that it was necessary to revive the Advisory Committee because the NDDC must work with the government of the member states to ensure that they took ownership of its projects and programmes, as well as check the duplication of projects. The Chairman said: “we believe that our projects must be monitored not only by us but by outsiders. We want to earn the confidence of our stakeholders. That is why we are auditing our systems to ensure that we are transparent. Before now, our processes were opaque. But, we have now opened the processes.

“We are thinking beyond oil, because oil is a finite resource and we all know that one day it will dry up or it will be overtaken by technology. So we have started the process of setting up a Niger Delta Development Bank. We must begin to see how we can fund development in the region from sources other than oil,” he declared.

Senator Ndoma-Egba said that the Commission was also preparing to build an Internet Network across the Niger Delta, stating that NDDC must be futuristic in planning for the development of the Niger Delta “We want to ring the region with a fibre optic network to deepen internet access,” the Chairman said. The NDDC Chairman stated that the NDDC had completed 168 projects in the state, while 150 projects were on-going. He said that work was yet to commence on 75 projects and 20 were stalled.

In his own remarks, the NDDC Managing Director, Mr Ekere, assured the governor that the Commission would re-engineer its processes to accommodate more projects for Cross River State. He said: “In an environment where some state governors are saying that they don’t need more projects, Cross River is yearning for more. So, we will give them more.” He said that the NDDC was not only interested in building physical infrastructure but was also helping to build human capital. In this wise, he said, the Commission recently entered into a partnership with the Nigerian Export-Import Bank, NEXIM, to set up a N5 billion development fund, where both parties would contribute N2.5 billion each.