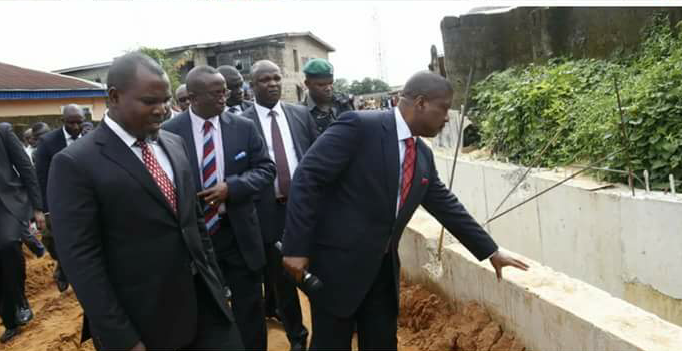 Addressing members of the benefiting communities during the commissioning ceremony, the NDDC Managing Director, Mr Nsima Ekere, said that the completion of the roads was made possible by the Commission’s insistence that all its contractors returned to site.

The NDDC Chief Executive Officer said that the current Board and Management of the Commission were confronted with many abandoned projects on assumption of duties.

He acknowledged the support of the Vice President, Professor Yemi Osinbajo, in getting the contractors to return to site.

Ekere commended the communities for ensuring that there was adequate security for the contractor to execute the project.

He thanked them for cooperating with the contractor and appealed to other communities in the Niger Delta to be equally receptive to NDDC contractors. He remarked: “When contractors are supported, they do a good job.”

He added: “We owe the Niger Delta region and our people the duty to implement and complete all on-going projects in order to facilitate sustainable regional development.”

Ekere expressed appreciation for the warm reception given to the NDDC by the people.

According to him, “it demonstrates their love and hospitality and above all, it shows their appreciation for the little NDDC has done for them.”

He assured that the road would serve the people well and open new opportunities for business and social activities in the area.

“This is just the beginning. More projects will be provided for communities like yours,” he promised.

Speaking on behalf to the communities, Chief Maurice Bassey Henshaw, thanked the NDDC for building the roads, stating that they would open up the area for more development.

He observed that the NDDC had added value to the lives of the people in the area. “We are fortunate to have these well paved streets from NDDC and we hope that they would be extended to our neighboring communities,” he said.

The NDDC top officials, led by the Chairman of the Commission’s Governing Board, Senator Victor Ndoma-Egba, the Executive Director Projects, Engr. Samuel Adjogbe and the Commissioner Representing Cross River State on the NDDC Board, Mr Sylvester Nsa, were present at the commissioning.

Commenting on the performance of the contractor, the NDDC Managing Director said the Commission placed a lot of premium on quality, adding that contractors must not be allowed to get away with shoddy jobs.

“When contractors don’t do the right thing, it gives NDDC a bad name,” he noted.