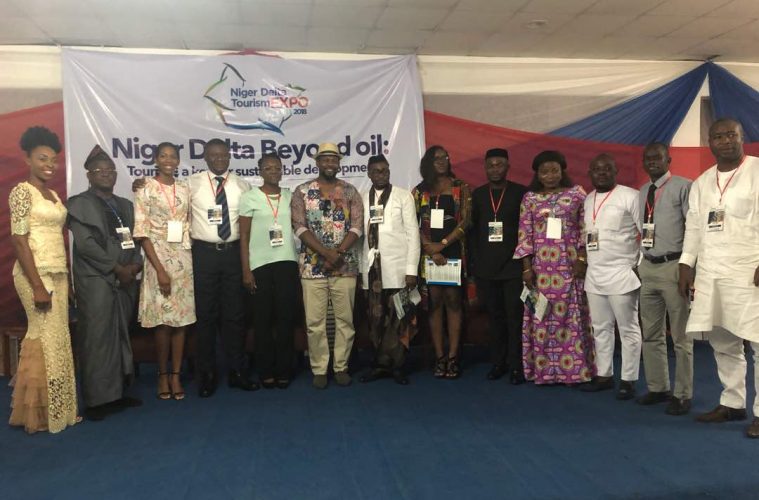 NIGER DELTA HAS THE POTENTIAL TO BECOME A TOP TOURISM DESTINATION IN AFRICA, AS NIGER DELTA TOURISM EXPO ENDS IN CALABAR

The maiden edition of Niger Delta Tourism Expo 2018 may have come and gone, but the memories and resolutions it left behind will continue to stand tall in the development tourism in the Niger Delta region and Nigeria in general.

The well attended event with the themed: Niger Delta Beyond Oil: Tourism, A Key To Sustainable Development  kicked off on Wednesday, 11th of July, 2018 at Tinapa Lake Side Hotel, Calabar, Cross River state with participants drawn across the nine Niger Delta states, government parastatals, the academia, students, tourism and hospitality professionals and the media. The 3 day Expo was declared open by the Cross River State Commissioner for Culture and Tourism, Hon. Eric Anderson. In his speech, he reiterated the Cross River state government full support for the expo and wished delegates a peaceful and memorable stay in Calabar.

Thereafter, the commissioner led participants and visitors on a tour of exhibition stands. This was followed shortly with an opening cocktail/Meet & Greet session at the Craft Village of Tinapa Lakeside Hotel overlooking the Tinapa Lake. There was so much to eat and drink supported with cool music setting the atmosphere ready for networking and interaction. According to the expo organizers, the aim of the tourism conference was to bring together top leadership from government, business and key players in the tourism and hospitality sector to discuss issues of tourism in the region and chant a way forward. In his keynote address, the Managing Director of the Cross River state Tourism Bureau, Mr. Clement Umina expressed delight over the Expo which is been held for the first time in Calabar and commended the organizers for the initiative.

He went on saying that tourism as an industry is “one of the biggest sectors that have generated the highest GDP in the world.” Mr. Umina said that creativity which is the integral part must always be considered if tourism must thrive in the Niger Delta region. He stressed the need for a total revamping of the tourism sector in the 36 states of the federation.

According to the Cross River Tourism Bureau boss, “If the Niger Delta must look beyond oil, we must first begin to consider this tourism potential, the new oil. We need to go back and identity the real unique natural heritage. Tourism can thrive in the Niger Delta with the Eco-tourism resources with our equally unique climate and culture.” Cross-section of participants at NDTE 2018

On his pathing notes, Mr. Umina noted that until we begin to have people in leadership in Niger Delta to guide the development of tourism, we will still not get it.

In the words of Dr. Babalola Wasiu, Vice President/CEO for Africa Continent World Hotels, he regretted that the Niger Delta region had so much, but is still blinking in the dark. He said that government does not understand what tourism is, “Government cannot make it, tourism belongs to the private sector, government only makes policies and create enabling environment for it to thrive.” He said tourism has a multiplier effect, and that what NTDC says about Nigeria has a long way to go in determining how the sector is been viewed. “We need people who can take responsibility and protect. We can’t push tourism if government don’t buy into it. Tourism is our national image. Commissioners of Tourism in Nigeria have to come together to agree on the name of national posterity. We need to create a Niger Delta Tourism standard, probably other regions will copy from us.” He advised. Tourism and hospitality experts at NDTE 2018

He revealed that between now and 2024, Nigeria will need a thousand workforce in the hospitality industry. According to him “the market is right, we need to train our staffs in capacity building to enable us meet up the trends in the sector,” He concluded. Other paper presentations were from the former managing director, Cross River State Tourism Bureau, Mr. Michael Williams on “The future trends in tourism marketing and management” and a presentation from the President, Calabar Chambers of Commerce and Industries, Mr. Efa Imoke on “Harnessing investment opportunities in tourism and hospitality in Niger Delta”. Amongst topics discussed at the panel sessions included: Youth involvement in developing community tourism in Niger Delta; Equality, gender and diversity issues in Tourism by Women in Hospitality Nigeria; Effect of new media trends in tourism and hospitality and a last session on sustainability of the hospitality industry in the Niger Delta. The high level conference was brought to a close with goodwill messages from industry experts pointing to the huge importance of the expo and its attendant benefits.

Other members of the LOC included Simon Nwachuya of Sluxia LLC in Europe and Joseph Idiege of Switch Academy.

The last day of the Expo was all about adding value and knowledge gain, the training of tourism and hospitality workforce for the region. Highlight of the day was a city tour around tourism attractions in Calabar.