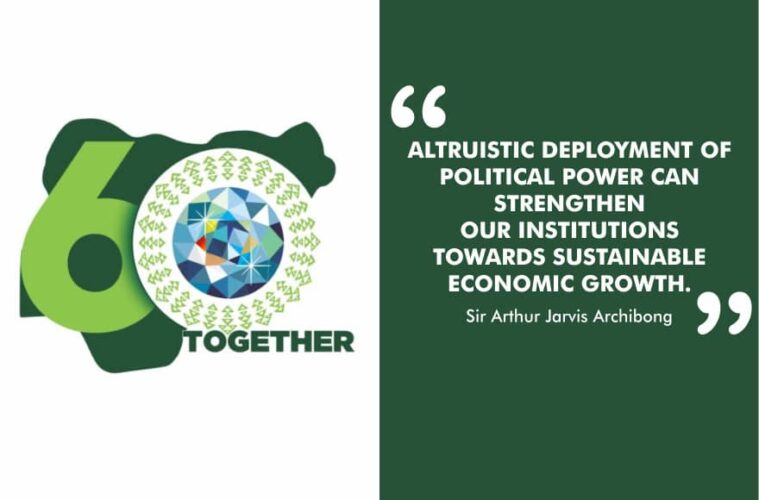 Nigeria @60: Independence And The Question Of Dependence In Cross River By Sir Arthur Jarvis Archibong

After 60 years, Nigeria boasts of 36  States and the Federal Capital Territory which makes 37.

All  these states are  aged between 24 and  53 years. However with over three decades, including Cross River State  having over five decades of statehood, is there anything really worth celebrating in terms of ‘Real Economic Independence’?

While the narrative has been skewed by different administrations, who are wont to  blowing their trumpet as having done well in growing the economy, it is public knowledge that many States rely almost singularly on Federal allocation to survive.

Cross River State which is above 53 years  today 1st  October 2020, is one of such states as per available statistical indices. The question we should then ask ourselves is how far have we achieved as a people?

With a population of nearly 4 million people and a land mass of over 21,000 square kilometers, the entire landscape is blessed with arable and fertile land, rivers, favourable weather conditions for farming, diverse natural resources with the deposits often of immense commercial value, with very low cost of extraction  comparably.

From becoming the first seat of government to a lot of other ‘firsts’, how well has the state fared in terms of security, welfare of the people and sustainable development? Or, is it a case of waiting for Godot?

Perhaps, as many have complained that the Federal Government saw the richness in the State and decided to put mining on the exclusive list in order to benefit from the huge resources that accrues from that sector to the central Government’s coffers while leaving the state and the local community to bear the high environmental cost  resulting from these exploitation activities.

Our peculiar case  is akin to you owning a farm land but not the content and or produce there of. Indeed  that act has  robbed States like Cross River of slews of revenue.

This added  to many other policies designed to give power to the central government weakened the States economically, the question remains ‘will the owner of a farm not fence off or ward off strangers to his or her farmland’ if he is hungry? Or will the farmer choose to ‘respect’ the mistake of his late forebears and wallow in poverty while slowly but steadily dying in hunger and deprivation?

How have the political class and those referred to as financial elites helped in this matter? As pointed out in an earlier article, Cross Riverians are strangers in their own land when it comes to owning the local economy and that only means a State that is dependent.

How many Cross Riverians own prospective mining licenses? How many of the quarries in Akamkpa really belong to Cross Riverians? Mind you  sitting on the board without owning shares or being a top management staff does not translate to ownership as the owner can hire and fire at will. This therefore means we are in ‘dependence’.

This should not be viewed as disparaging the efforts of successive administrations and businesses in Cross River State who have strived to develop sustainable systems and institutions.

However this is a deep introspection to the way we as a people have let opportunities to exploit  the wealth that is within our ambit slip by. Maybe we are just  blinded by egos or false sense of economic independence created by the opulent lifestyles of a few whose hands have been dipped into our commonwealth and have been feasting  à la carté and voraciously.

Perhaps we do not believe in realistic values placed on creating wealth, seems we are content with the status quo and are loathe to challenge situations.

That is why a Cross River, bigger than some countries like Jamaica, Wales, Slovenia, El Salvador and even Israel (Excluding disputed territories like Golan Heights, West Bank and Gaza Strip) and in most cases with a higher population, cannot boast a GDP even a tenth of these places.

Inspite of the narrative that the State is not blessed in terms of geographical positioning in Nigeria, truth is that the location is strategic for macro or micro economics. It is only a question of what has stopped us from utilizing all these advantages?

We also need to bring to the fore the all important question on what the Political class has done to correct this injurious act of the Federal Government acquiring the rights to all mineral Resources with no commensurate benefit to the state or the community? We concede that it is a constitutional issue but I believe that working in concert with our sister states as in the case of 15% derivation in respect of Crude Oil, we may be able to change the obnoxious law on Mineral rights.

In terms of acreage Cross River is  slightly bigger than two of the biggest sub economies in Nigeria; Lagos and Ogun States! To put things in perspective, Akamkpa is 1.4 times bigger than Lagos and the population of Ogun State is similar to that of Cross River State nearly 4 million people.

But in what economic indices is Cross River similar or bigger than these two States? None and this is the honest answer. How often have we asked ourselves this pertinent question.

This means that a functional port will definitely improve the fortunes of the State.

Geographically too, Cross River is situate closer to China via sea! Guess what? Most of the micro trading especially import comes in from China!

When we take trips down memory lane and see how our forebears flourished in maritime trade, one wonders what became of us as opportunities  abound from the agro sector to extractive industries and beyond, yet for some inexplicable reasons we are leagues behind economically in the guild of territories and sub federating units.

As we celebrate the 60th independence of the motherland, let us pause and think where exactly  we went  wrong and  also profer solutions to make right this pathetic status quo?